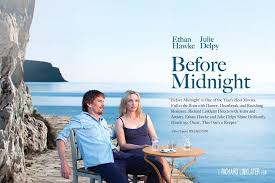 Year: 2013
Director: Richard Linklater
Cast: Ethan Hawke, Julie Delpy
Before Midnight will be screening at the Sydney Film Festival on the 8the June 2013.
Now showing in cinemas across the USA
Opening on the 21st of June 2013 in the UK
Opening on the 18th July 2013 in Australia

So the wait is over and the trilogy finally complete. We now finally know the fate of Celeste and Jesse.

Richard Linklater's trilogy of Before Sunrise, Before Sunset and Before Midnight has been labelled (incorrectly) as the "lowest grossing trilogy of all time" for the fact that it is not your typical trilogy. The films have a tremendous following based on their atypical method and value with the backdrop of a different beautiful European city each time. The latest instalment does not disappoint as it sticks to the same method, but is different enough not to stale or unoriginal.

Before Midnight is set nearly a decade after we last saw Celeste (Julie Delpy) and Jesse (Ethan Hawke) in Paris when they met up for the second time after their romantic first meeting in Vienna nearly 10 years earlier. They find themselves this time in Greece and even though much has changed, they still find in themselves the people they were 20 years earlier on that chance encounter on a train on their way to Vienna. 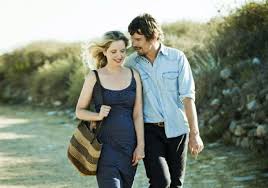 This last film in Linklater's series is completely different to the first two films. Celeste and Jesse are in a completely different stage of their life compared to the other two times we have met them and therefore the lengthy conversations which they have are not the way they used to be. Being older and at a different stage in their life, they have new responsibilities and challenges and this means different things need to be discussed. Therefore, Celeste and Jesse are a lot more argumentative and this leads to the film being more emotional than they ever have been before.

At times the arguing can become really unsettling and almost reminiscent of Who's Afraid Of Virginia Woolf?, though still nowhere near as dark. What people will find from this film is that what the two are arguing about and the problems they face are very relatable to all people in that position. If you are like Celeste or Jesse, you almost feel like you are watching yourself and it gives a new perspective on the way you see things. This is a wonderful thing for a film to do because not only is it entertaining, but it is also informing and hopefully even bringing about a change with this information.

The script, as is the case with the first two films, is fantastic. Written by Linklater and the fil's two stars, Julie Delpy and Ethan Hawke, the dialogue is fantastic. There are some very funny lines during the film and so interesting to listen to that you hang off the character's every word.

Then there is the gorgeous backdrop of the southern Peloponnese in Greece. It is absolutely exquisite to behold and so much beauty is captured as Celeste and Jesse explore the area. The little chapel they come across is an amazing location.

Delpy and Hawke are both wonderful in this. There is no lack of chemistry between the two, just as there never has been. They bounce off each other so well and their dialogue is spoken so naturally and with so much ease. Both capture every emotion which they are supposed to be feeling and impose it on the viewer as they experience it on screen.

It is sad to see the trilogy finally over, but Before Midnight is the perfect finale. Celeste and Jesse are completely relatable, likable and, as always, thoroughly entertaining.