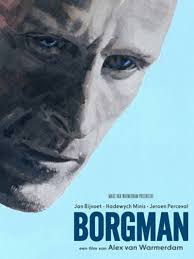 Year: 2013
Country: The Netherlands
Director: Alex van Warmerdam
Cast: Jan Bijvoet, Hadewych Minis, Jeroen Perceval, Sara Hjort Ditlevsen, Alex van Warnerdam
Borgman will be screening at the Sydney Film Festival on the 13th and 14th of June 2013 and is one of the entrants in the Official Competition. For more information please see here

Having had it's world premiere at this year's Cannes Film Festival, Borgman became the film everyone was talking about for it's unsettling atmosphere and creepy characters.

From all the talk coming from the south of France, one would expect Borgman to leave you completely rattled and with recurring nightmares as promised. However, if you listen to the hype you will be disappointed. Yes it is creepy and unsettling, but not as much as the hype suggests. There is no doubt that it is a very interesting, entertaining and well made film, but it isn't the scariest film of the year that it has been made out to be.

A strange, bearded man (Jan Bijvoet) is chased by a priest and his men with spears and axes when he comes across a modern family house. He knocks at the door asking the man of the house, Richard (Jeroen Perceval) if he could have a bath. Richard isn't convinced, but his wife Marina (Hadewych Minis) feels pity for the man and takes him in. The man, who now reveals himself as Camiel Borgman, and his strange friends draw each of the family in, causing turmoil and havoc which intensifies until the dramatic final night.

Borgman seems to be one of those films you like more the more you think about it. When the credits roll, there is a lot to take in. On the surface there is a good film that is well shot and very clean cut and neat. It is not a typical "horror" film. It is extremely subtle and doesn't force itself to scare the audience. It has a very dark undertone and it's creepiness resides in how Borgman and his friends don't visually resemble the typical idea of what evil forces would be. It is scary that they come across so normal  and just fit right into society, until their behaviour suggests otherwise.

There is a lot more to the film that lies under the surface. There is a lot that you need to really think about and take in after the film. One thing about this film is that it doesn't supply you with answers and you have to come to conclusions yourself about several aspects of the film, such as the presence of the greyhounds on the property and also the actual inner character of young Isolde. This is frustrating, especially with the events at the end of the film. As you really need to think about it and draw your own conclusion, you don't feel a sense of closure or peace with the film. The overall feeling of the film is unsettling, but it is unsettling in a different way at the end in that you are left in an unsettling state of confusion.

Borgman also claims to be blackly humorous. It is only very, very subtly funny. It is not overtly funny, it's more bizarre than funny. If you find the strangeness of something funny, than you may well find Borgman quite comical.

Visually, the film isn't a masterpiece or a selection of beautiful pictures, but it is very neat and clean cut. That is one of the things that makes Borgman unlike other films of it's particular genre. It doesn't rely on it's visuals for it's atmosphere, but does make sure that the visuals are as polished as they can be. 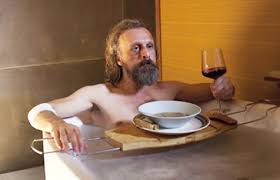 The players bring these unsettling characters to life. Jan Bijvoet delivers a very subtle and unexaggerated performance of Borgman. He doesn't give the typical performance of such a being, but this is why he works. Borgman is manipulative, cunning and scheming and this is were his evil shows through. Even though not physically powerful, he presence is that of a leader and of control.

Hadewych Minis and Jeroen Perceval are very good as married couple Marina and Richard. Perceval gives an emotionally charged performance as a father who wants to protect his family and is falling apart at the seams in the process.

Borgman is very interesting and keeps you enthralled from the beginning to the end without fail. However, questions remain unanswered and it is made to unsettle and it is fine if that unsettling feeling comes from confusion.

The 60th Sydney Film Festival will be running from the 5th-16th June 2013. Please see the official website for more details.