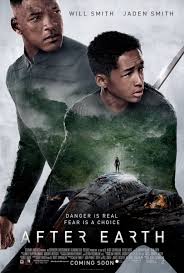 Will Smith wanted to once again work with his son, Jaden. M. Night Shyamalan needed a blockbuster to get his approval rating back up. Post-apocalyptic movies are very in vogue at the moment.

These are probably the three reasons After Earth was made.

Apart from these three reasons, it is a confusing notion as to why this film was made at all. It lacks more than it does achieve and although not completely mind-numbingly boring, it may be at the bottom of the blockbusters (if you can call it that) this season.

Some years into the future, Earth has been deemed unfit for humans to live and the race has migrated to Nova Prime. General Cypher Raige (Will Smith) returns home to his wife, Faia (Sophie Okonedo) and son, Kitai (Jaden Smith) after a lengthy mission. In order to develop a better relationship with his son, Cypher takes him on his next duty. During the flight, an asteroid storm hits and damages the ship, sending it crashing into Earth. Cypher and Kitai are the only two survivors and as Cypher is badly injured, Kitai must venture across the dangerous lands of Earth in order to get help for his father. 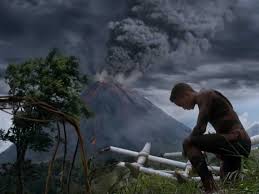 It has been years since M. Night Shyamalan has had a well received film. After Earth is a different path for him to walk down but it has not proved a successful one. Even having one of the biggest movie stars in the world take part in his film hasn't helped his cause.

After Earth lacks the suspense, wonder and emotion such a film would be expected to provoke. What it doesn't lack is predictability, which isn't anything to be proud of. From the word go, you know exactly what is going to happen and how the film will reach that point. Although it isn't so dull that you would rather have a nap than watch it, it isn't a particularly interesting or unique piece of work. It just seems like the film didn't even have that much potential from the onset being as it comes along in a swarm of apocalyptic and post-apocalyptic films and it doesn't present anything that makes it stand out from the rest.

What the film does have going for it are some very impressive and realistic visuals, particularly those on Earth itself. It is just a shame that there is no impressive story nor a worthy musical score (which is very much like the score in other Shyamalan films) to accompany it.

Jaden Smith does well in his role and does absolutely overshadow his father. He does well in the emotional scenes with his father and shows that he does have a successful career ahead of him. Smith Snr is completely unlikable in his role as Cypher. He gets no sympathy from the audience and just gives a dull and lifeless performance. Perhaps he wanted to let his son have the spotlight more in this film, but it is painful how little substance his performance and character has.

After Earth is sure to be one of those films that just disappears into the abyss when it's season is over. The Smith combination should look into the past at what made the team work in The Pursuit Of Happyness and stick at this rather than try too hard to make a blockbuster.

This is the way we would much prefer to see the father and son combination. 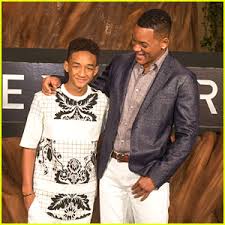 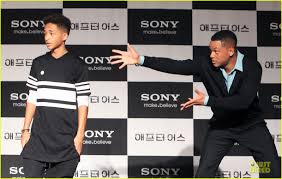 Everyone loves some Smith love! We need Will Smith to crack a smile or two in his films, he is far more likable when he has a smile and hope.