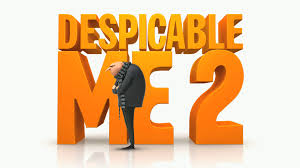 Year: 2013
Director: Pierre Coffin and Chris Renaud
Cast: Steve Carell, Kristen Wiig, Russell Brand, Steve Coogan, Miranda Cosgrove
Now showing in Australian cinemas
To be released in the UK on the 28th of June and the USA on the 3rd of July 2013

Despicable Me fans can now breathe a sigh of relief. Despicable Me 2 is in no way an insult to the first film.

The second film carries on all the fun, laughs and entertainment that the first film gave us, with a few little changes according to what fans loved from the first film. The main change being that those crazy minions have a greater presence in this film. There shouldn't be too many complaints about that. 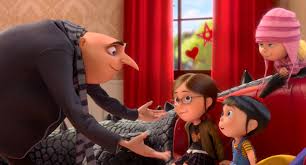 After Gru (Steve Carell) is cured of his villainous ways in Despicable Me, we find him at the beginning of this film still completely besotted by his three adopted daughters, Margo (Miranda Cosgrove), Edith (Dana Gaier) and Agnes ( Elsie Fisher). He has adapted to fatherhood well and is living a low key life, which is quite the opposite to his days as a villain. That is until Agent Lucy Wilde (Kristen Wiig) shows up in his front yard trying to convince him to join the Anti-Villain League (AVL). Gru takes some convincing, but he eventually decides to help out the AVL find a new villain who is creating mayhem. The unthinkable happens for this one time bad man though, he may have found his match in Agent Wilde. 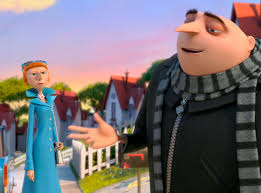 Despicable Me 2 is great for the same reasons that Despicable Me was. Both of the films have a wide appeal in that their attraction isn't restricted to a particular group of people. It isn't your typical clichéd film in that the protagonist is not a particularly charming character nor is he easy on the eye. Gru may not be a villain anymore, but he still looks like one and can also have the attitude of one too.

The screenplay, written by Ken Daurio and Chico Paul, is very good and very different from the first film, while still having the basics right. When Daurio and Paul were writing the screenplay for Despicable Me 2, they must have seen how well the minions were received by all in the first film because they feature a lot more in the second film (and in it's promotions). They feature more in the actual plot than they did before and there is some hilarious scenes with them right at the end of the film. 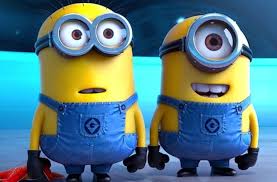 The wonderful thing about the actors who supply the voices in Despicable Me 2 is that they are truly in actor mode and are not just speaking in their own voice. Both Steve Carell and Russell Brand's voices are almost unrecognisable as Gru and Dr Nefario. They both truly become their character and show there is a lot more to giving an animated character your voice rather than just reading your lines. Kristen Wiig is also good, not for the same reasons as Carell and Brand, but rather because she is able to portray emotions through her voice and it would seem like she had a great amount of fun being  Lucy Wilde.

It is not a necessity to see Despicable Me before you see Despicable Me 2, but it is recommended so that you understand the characters a bit better. There isn't a great deal of character development as it is assumed you know who the main characters are and how they got to be who they are. There really is no spoken connection to the film before, so it is preferred you would see the first film before this one.

Despicable Me 2 is very funny and entertaining and one of the best animations you will see this year.

Does anyone want to petition for a Minion Translation Dictionary?


You may have also seen Steve Carell in......
Despicable Me as Gru
The Way, Way Back  as Trent

You may have also seen Russell Brand in.....
Despicable Me as Dr Nefario
Rock Of Ages as Lenny

You may have also seen Kristen Wiig in......
Bridesmaids as Annie