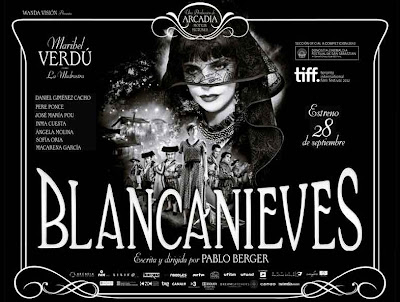 For how many retellings of the fairy tale "Snow White" there have been since Disney's masterpiece in 1937, Blancanieves has presented the story with so much beauty and originality in it's presentation that makes it one of the best adaptations on the big screen ever. 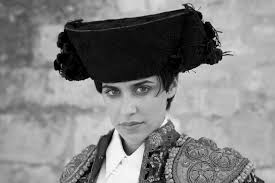 Set in 1920's Seville, Carmen (Sofia Oria/ Macarena Garcia) is the beautiful daughter of the late Spanish dancer, Carmen de Triana (Inma Cuesta) and the famous bullfighter, Antonio Villalta (Daniel Gimenez Cacho). Her father is left disabled after a horrible accident and she is sent to live happily with her grandmother, but when she passes away, Carmen is sent to live with her father and horrible stepmother, Encarna (Maribel Verdu). After another horrible turn of events, Carmen comes across seven little friends who change her life and give her the family she has always wanted, as well as a career in bullfighting.

The way the timeless classic has been recreated is wonderful. It is not made to seem like a fairy tale, but rather the tragedy of this poor girl with some quirky twists and turns. It is as though director and writer, Pablo Berger has just taken the skeleton of "Snow White" and formed a 1920's Spanish body around it. There are a few tiny things, if being picky, you can see in the film, particularly in the concluding scenes which are a bit too far fetched and don't make a whole lot of sense, but that is where the fairy tale basis comes into play. 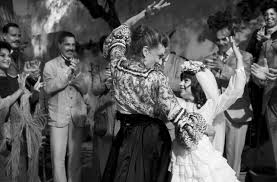 The film, made last year, is filmed in black and white and is silent with English subtitles. You feel as though you are watching a film made in the time period in which the film is set, but with all the film making tricks of the trade we have learnt since. In this way it is like the 2011 film, The Artist, but this is where the similarities end. By way of gorgeous images and Spanish guitar music, you feel completely submerged in the world in which Blancanieves is set. You feel as though you are transported back to the beginning of the 20th century in Spain and it is a wonderful place to be.

The opening of the film with the landscape of Seville and the crowds of people running towards the bullfighting arena sets the scene perfectly. You immediately feel the atmosphere of the town in that time period and hear everything these people could hear and see all the bright colours of the bull fighting ring and the flamenco dancers, even though you cannot see these things on screen. The costume design of the bullfighters and all the women in particular is exquisite, and, as just noted, you don't need to see them in colour to see the beauty in them.

There are some amazing performances in this film. Macarena Garcia who plays the older Carmen is wonderful. She is so likable and expresses her emotions perfectly for a silent film. Sofia Oria plays the younger Carmen and is also wonderful. She is adorable, you has so much fight in her. Daniel Gimenez Cacho gives a very convincing performance as well. Maribel Verdu is the star of the performers. She is so good as the stepmother because she has the ability to look so elegant and beautiful, yet when she turns on the evil, she is downright horrid.

Blancanieves is wonderfully entertaining and a visually stunning film. It is so original in it's execution and is unlike anything you have seen in a long, long time.

The 60th Sydney Film Festival will be running from the 5th-16th June 2013. For more information, please see the official website
Posted by NP1982 at 11:10 PM