At the beginning of the Australian premiere of Nerve at the Sydney Film Festival, the audience was told that the film had only finished production about 10 days before.

To be completely honest, that is what it looks like too.

While Nerve actually does have the heart to be a great movie with a wonderful story and screenplay, the editing and cinematography leaves a fair bit to be desired. Visually the film looks a bit rough around the edges and looks like it just needs a bit of tidying up. This may be the look that director Sebastien Guy was going for, but it just seems a little too rough to completely enjoy.

Jakob Evans (Christian Clark) has had a very rough time. He has been released from rehabilitation after suffering an emotional breakdown brought on by his wife's death in a car accident. To make matters worse, just before the car accident he caught his wife in bed with another man. He believes the only way he will receive answers and closure is by finding the man who was sleeping with his wife. Jakob sets out on his search with the help of his new flatmate, Grace (Georgina Haig), a girl who has problems of her own.

The idea and backbone of Nerve is actually very, very good. It is probably one of the best psychological drama's ever to come out of Australia due to the incredible turn of events towards the end of the film. It takes awhile to get into the film, but once it finds it's momentum the story is quite enthralling. There are several scenes which seem to be out of place towards the beginning of the film, but they all make sense in the conclusion. However, the conclusion also does present more unanswered questions.

It is the editing and techniques used to construct the earlier scenes which provide more annoyance than artistic integrity. Each scene is really quite short and there is the over-use of the fade to black technique. It would have been far more effective to have just cut from one scene to another but the result of every scene fading the black just makes it seem jerky and makes the film lose momentum constantly. This is where the impression of the film having a rushed production finish becomes evident, as it just doesn't seem like there was enough time for actual editing and more time just to do the same thing over and over. Even if this was meant to seem artistic, it just comes across as an annoyance. Also, there are some scenes that probably don't need to be in the film at all as they don't tell us a great deal and they don't add to the story at all.

One good thing about the cinematography is that it emphasises some things in certain scenes (such as those with Dr White) which all make sense at the end of the film. It is a clever technique to use as it doesn't make much sense at the time, but does at the end. On the other hand, there are quite a few shaky shots, particularly of the scenery, which seem out of place in the film.

Christian Clark does well to carry the film. In particular, when he is first released from rehabilitation, he is wonderful in the state of confusion he is still in. Georgina Haig is particularly good and completely believable as Grace. While Clark's performance is very intense, Haig's lightens it up a bit and she is a joy to watch. Gary Sweet is also a stand out as Ben, the mourning father of Jakob's wife.

Nerve is the film to see if you want a psychological movie that plays with your mind. It's a film to watch for the story, not for the production. 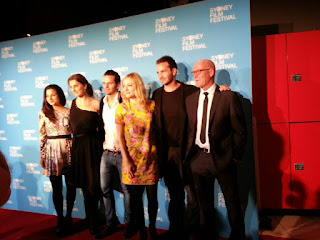 Photo taken by Nicki Newton-Plater on red carpet at the Australian premiere of Nerve on the 12th of June at the Sydney Film Festival.