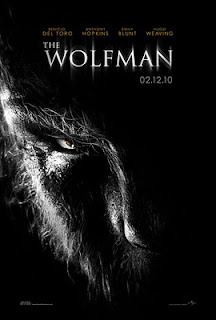 Can an unoriginal film ever be classified as a great film? That is the question posed with “The Wolfman”. It can definitely be a good film, but nothing that is worthy of the highest praise. Of course, there are always exceptions, but “The Wolfman” does not feel as though it is. However, it is by no means a bad film. Joe Johnston does a great job at making a well made film out of an idea that has been done over and over in the past 100 years of film. In this 2010 version of “The Wolfman” (there have been numerous films relating the werewolves and wolf men over the years, too many to list here), Lawrence Talbot (Benicio del Toro) returns to his childhood town of Blackmoor in England to investigate the death of his brother. He is confronted with his father (Anthony Hopkins), who had a large hand in contributing to his disturbing childhood and also some disturbing revelations about himself and his family. There is no guessing what those revelations are.

On the whole, “The Wolfman” is very well made. The recreation of turn of the century England is extremely impressive and makes for a perfect period piece. The visuals of the film in each scene are captivating and aesthetically pleasing. A horror period piece is not a common breed of movie, as one only comes out every few years, and it is exciting to see the most recent perfect the period visually. The script isn’t bad and also captures the period piece, but the story is a typical werewolf story. It is highly predictable and can be quite silly. But these two criticisms are true to the film’s genre. The criticisms of the film are criticisms that could be applied to any film of its genre and any werewolf film both past and present. However, again, it is a good film for its genre.

The role of Lawrence Talbot for Benicio Del Toro is in some ways a different role to what he is typically seem playing. Del Toro takes on the gentleness of the grieving Talbot to begin with well, which is a change from the usual harsh quality of his roles. In some ways, he feels miscast as Sir John Talbot’s son, until he makes his transformation to the monster of the film. It is then obvious to see why he was cast in this role as physically, he is perfect for the role. “The Wolfman” is by far not Anthony Hopkins best role of his career, and is almost forgettable, if it wasn’t for some unsettling moments. Emily Blunt performs well, as she does in period dramas. Blunt is one of those rare young actresses who can successfully pull off characters from any time in history, although her role as Gwen here is like a non-regal version of the young queen she played in “The Young Victoria”. Hugo Weaving is a standout in the film in the role of Abberline. He is dark and sarcastic, but his wit makes him strangely endearing.

“The Wolfman” is definitely enjoyable to watch and if you take it as a horror film with the classic werewolf character, it is not a bad film at all. However, if you are expecting a suspenseful film with an ending that is surprising, there is a disappointment in store. “The Wolfman” is a highly anticipated film release and lives up to its expectation.
6.5/10