Scott Pilgram vs The World 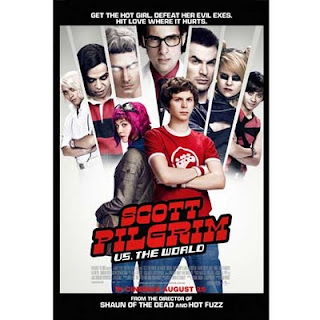 In My Own Words
What is it about these teen flicks these days? The lead characters are always the nerdy, no-hoper boy who crushes after the girl of his dreams, and they will most likely get them and also lose them in the course of the film. The guy in these teen flicks will normally be either Michael Cera or Jesse Eisenberg. The girls vary, but they are very rarely the blonde bombshells. They are normally the smart mouthed brunettes who could rip the guys apart with their wit. Think along the lines of Kat Dennings, Emma Stone or Kristen Stewart. Has it always been this way? When I think about the teen flicks that were made when I was in high school and they were more about the girl, next door pining after the stud of the school. Ah, genre trends. Got to love them!

What makes a successful genre film? I’ll tell you what does...breaking through the mould and making people who aren’t fans of that particular genre sit up and take notice. I’m not a huge fan of westerns, yet there are some westerns that I love. “Scott Pilgram vs The World” may just be one of these films. It’s got all the elements that make it fit into the teen flick genre of today, yet it breaks through to be a film that not only teenagers and young adults will enjoy. I was lucky enough to have the cinema to myself today, and I definitely did LOL (laugh out loud) unashamedly. This film is just a good comedy, whether it is aimed at a younger audience or not. It’s one that I will probably hire when it comes out on DVD because I would really like to watch it and giggle again.

Review
On the surface, “Scott Pilgram vs The World” looks just like just another teen movie. It is a teen movie, but it is not just another teen movie. “Scott Pilgrim vs The World” is perhaps the best teen flick we will see this year. It is well made, well written and very funny. Even though it is one of the better teen flicks, some older viewers will still find it a little too silly fand young for their liking. However, the silliness works and keeps the viewer interested. Scott Pilgram (Michael Cera) is a 22 year old who lives with his gay roommate, Wallace (Kieran Culkin), plays bass in his band and has caused controversy by going out with a 17 year old school girl. His life is turned upside down when he meets Ramona Flowers (Mary Elizabeth Winstead). As soon as the two start seeing each other, Scott is faced with Ramona’s seven evil exes whom he needs to defeat in order to have a peaceful relationship with his new girl.

As one might guess, this film crosses teen comedy with the comic book genre. Don’t be fooled though, it’s not an action film. Sure there are lots of fighting scenes, but no big bang special effects. The special effects are reserved more for bringing the elements of a comic book to the big screen. The result is a film that is loads of fun to watch. “Scott Pilgram vs The World” is actually a very well made film. The cinematography is very good and the editing is superb. The musical score is also very good, supplying a strong opening and some interesting choices throughout the film which work perfectly. The choice of Toronto for the films setting is a great choice and it is definitely on show here. Edgar Wright does a great job at directing the film and his actors. The script is witty and well written. There are jokes throughout the film that are plain, simple humour without being obscene or crude. The humour is what makes this film appealing to a greater audience than that of a run of the mill teen flick. It is humour that anyone, no matter how old they are, will find funny. Watch out for the Seinfeld reference in one particular scene that will have you giggling within seconds! There are only two noticeable faults with this film. One being that at times it can be very silly, as one might guess from the title and plot outline. It can also be a little too busy at times. There is a lot going on in the film. For some people it may be a bit too much to keep up with.

Michael Cera doesn’t really bring anything different to the plate than he does in his other films. It is a role that was made for him basically. He plays the hopeless, awkward Scott Pilgram very well, but it is nothing we haven’t seen before and doesn’t make this role very special. Yet, he is still likable. Mary Elizabeth WInstead also doesn’t have a very hard role to play, but does it well enough. Both Kieran Culkin and Anna Kendrick are hilarious in this film, and provide many of the laughs throughout. Ellen Wong also deserves credit for her role as Scott’s stalker-ish ex girlfriend, Knives. She plays out the role as the young, innocent, yet slightly scary schoolgirl very well and although she is meant to be annoying, it isn’t hard to develop a soft spot for her. Each of the characters have a great deal of character and are very well constructed. The audience knows who everyone is and remembers them all as a result of strong characterization and wonderful directing.

“Scott Pilgram vs The World” is two hours worth of fun and laughter. Somewhat silly, but it is a fun silliness. There is so much in the film to keep it interesting from start to finish. Finally, a teen flick not just for teens.
8/10