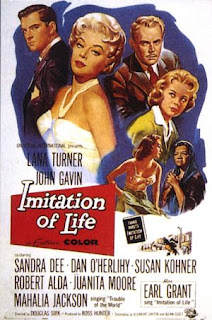 Imitation Of Life
Year: 1959
Director: Douglas Sirk
Cast: Lana Turner, Juanita Moore, Susan Kohner, Sandra Dee
Screening at Sydney Film Festival 8th June-19th June 2011
Monday 13th June 2011 3pm Art Gallery of New South Wales
It is time once again for the most important  film festival in the Australian events calendar. The Sydney Film Festival is in its 67th year and with the Australian film industry only getting stronger, the festival itself is pulling in not only some fine films competing for the Official Grand Jury prize, but also some very exciting Australian premieres.  Hot on the tail of its Cannes Film Festival showing, Terrence Malick’s “The Tree Of Life” will be showing as will Julia Leigh’s controversial “Sleeping Beauty”. However, the great thing about the Sydney Film Festival is that it brings back to the big screen several films that were made during the 20th century that have not been seen in Australian cinemas in many of our lifetimes.
One such film that will be showing at the Sydney Film Festival which I will definitely be seeing is Imitation Of Life. It won’t be the first time I have seen this film, as it is actually featured in my top 50 favourite films, as listed here on Imdb.com, but there is nothing like seeing one of your favourite films on the big screen. Especially if, like me, you have only ever had the opportunity to see it on DVD. However, if you haven’t seen this film and you are in Sydney during the film festival, I do encourage you to go along to the Art Gallery of New South Wales on the 13th of June (the Queen’s Birthday Holiday) and check it out.
Imitation Of Life opens with the meeting of actress, Lora Meredith (Lana Turner) and Annie Johnson (Juanita Moore) on the beach at Coney Island. Feeling for Annie’s hardship, Lora invites her and her daughter, Sarah Jane to live with her and her daughter, Susie. Both girls experience growing pains, yet Sarah Jane (older version played by Susan Kohner) has the harder situation. While Annie is dark skinned, Sarah Jane is white as her father was. The last things she is is proud about her mother’s heritage and continually leads people to believe she is white, which ultimately means disowning her own mother. Susie (Sandra Dee), on the other hand, feels neglected by her mother who she feels always puts her career before her.
This film contains a lot of confronting issues, especially relating to race. The time in which Imitation Of Life was made was still a time of racial discrimination so one can partly understand why Sarah Jane would want to avoid that oppression at all costs. Yet, the way she treats her mother is any parent’s nightmare. It is these two minds and conflicting situations in Sarah Jane’s mind that make this film so intriguing. Sarah Jane is, as much as you want to kick her most of the time, a great character. She represents those people in society who feel that they have an identity crisis as a result of being a mix of two races. The situation is particularly heartbreaking when looked at from her mother’s point of view. Sarah Jane blames her mother for being the colour which she is and ultimately does not want her to be her mother. Having your child feel this way about you is any parent’s nightmare. Every parent wants their child to be proud of where they came from and to love the woman who made them, yet Sarah Jane despises her.
The relationship between Lora and Susie does seem to get lost in the Annie and Sarah Jane situation. Although Susie feeling neglected by her mother is supposed to be a big issue, it is almost forgotten throughout the film as the audience is so absorbed by Annie and Sarah Jane. Yet, it does work in a way because Lora gets involved in the dispute between Annie and Sarah Jane and Susie is almost forgotten.
Imitation Of Life is very character driven and the acting always had to be of a high standard to make this film successful. The acting is brilliant by all four of the leading ladies. Douglas Sirk was known for being a “women’s director” and in this film he shows why. Susan Kohner makes you feel angry and emotionally strained watching her, which symbolises how successfully she completes her job as Sarah Jane. Juanita Moore also gives an emotionally charged and absolutely heart breaking performance as the mother who’s daughter is drifting further and further away from her. She is devastating in this film and everyone feels the depth of her pain.
Lana Turner, who gave her best acting at this point in her career, gives a stellar performance. There is one particular scene in Imitation Of Life which could well have been the best scene of her career. She is stunning in this film, but also strong at some times and emotional in others. Susie was Sandra Dee’s breakthrough role and the role just before she was launched into Gidget stardom. She is very sweet, but also manages to give her all in the scenes which demand her to give more than just sweetness.
Even if you are not in Sydney for the film festival this month or you are busy on the 13th of June, track down a copy of Imitation Of Life to watch something quite spectacular. It is a remake to the 1934 film of the same name starring Claudette Colbert, yet this earlier film is not quite as emotionally gifted. Remember to watch this with a box of tissues nearby.
9.5/10
Posted by NP1982 at 7:01 AM