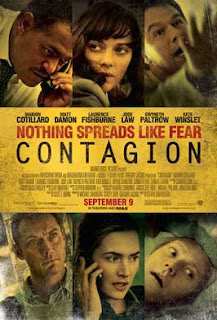 Contagion
Year: 2011
Director: Steven Soderbergh
Cast: Gwyneth Paltrow, Matt Damon, Kate Winslet, Laurence Fishburne, Jude Law, Marion Cotillard
Before I begin my review………
Contagion is not a movie for hypochondriacs or those who are obsessive compulsive.
If you think you are sick all the time and are constantly worried that you are going to catch something somehow, Contagion will only fuel the fire.
I don’t consider myself a hypochondriac or obsessive compulsive, but this movie had the ability to make me paranoid. When Kate Winslet’s character, Dr Erin Mears said “The average person touches their face 3000 times a day”, I immediately became aware of how many times I touched my face or whenever someone around me did.
One of the first signs of the virus in the film is the presence of a cough. There were some coughers in the cinema, and my heart skipped a beat every time I heard one of them.
I suppose these reactions I had to the film are just an indication of how realistic Contagion is. It is now a few hours since I saw the film and the more time elapses, the more disturbing I find it. The dislodging of your emotions in a film is always a sign of a good film. You may enjoy the film or not, but the fact is that if a film makes you feel a way you weren’t feeling when you walked in the cinema, then it is doing something right.
Review……..
Contagion is Steven Soderbergh back to his best.
Soderbergh rejuvenates his ability to unsettle his audience while they are completely unaware as they are completely taken by his brilliant film-making skills.
Beth Emhoff (Gwyneth Paltrow) returns from a business trip to Hong Kong with what she thinks is a bad case of the flu combined with jet lag. It is clearly not, as Beth and her young son both collapse into seizures and die within a few days. Her husband, Mitch (Matt Damon) is determined to find out what happened to his wife. The virus spreads rapidly around the globe and with millions affected and scientists cannot find a cure quick enough.
Although Contagion can be considered a suspense film, the film goes deeper than just being a race against the disease. Contagion is a scary dose of the mortality of humans and how society acts when faced with their mortality.  The realism in the film is incredible. Soderbergh’s direction makes you feel like you are right there when everything happens.
However, Contagion does lack something which a suspense film normally excels at, pace.  The first half of the film is the perfect pace, while the second half completely slows down and makes it feel longer than its 106 minutes. Yet this is Soderbergh taking time to show the stages society goes through and what the virus does to each of the characters emotionally.  This period of the film does come across as a time where not much is really happening, but look deeper to see what Contagion is really trying to tell you.
The musical score is fantastic and completely suits the atmosphere of the film. The beginning sequence of the film is the perfect way to begin the film and heightens your curiousity and interest straight away.
There is not one actor who puts in a bad performance in Contagion. Kate Winslet, Marion Cotillard and Laurence Fishburne are perfect in their roles, but these three actors seem to be a rare breed of actor who can clearly just not give a bad performance.
Jude Law is also a real stand out with a role which is very different to his usual role. His character of Alan Krumwiede is very interesting. He plays the part well of the “journalist” who completely takes advantage of the situation, or so it seems.
Matt Damon is probably the only lead actor who you feel could have given more in his role. He isn’t quite as grief stricken as he should be considering his wife and stepson have just died. The relationship with his daughter, Jory played by newcomer, Anna Jacoby-Heron, doesn’t seem at all realistic. However, Jacoby-Heron is one to watch out for.
Contagion may not be a film for those who are worried about their mortality and health and will unsettle you, but there is no denying that it is very well made and a piece of art.
8/10
Posted by NP1982 at 4:22 AM