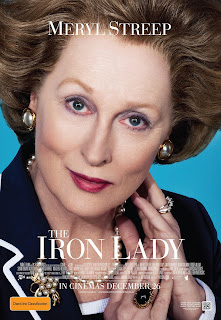 The Iron Lady
Year: 2011
Director: Phyllida Lloyd
Cast: Meryl Streep, Jim Broadbent, Alexandra Roach, Richard E. Grant
Before I begin my review….
For the awards season, I am Team Meryl all the way.
Surely this is her year. Let’s face it, it’s about time. Streep received her first Academy Award nomination in 1979, won her first Academy Award in 1980 for Kramer vs. Kramer, was nominated again in 1982, won her second Academy Award in 1983 for Sophie’s Choice and since then has had another 12 nominations with no cigar. At 15, that’s more Academy Award nominations than anyone else in history. Katharine Hepburn comes second with nominations with a total of 12 nominations, yet Hepburn also has the record for most Academy Awards won with her 4.
One thing you have to love about Streep is that she is completely consistent with her performances. She’s so versatile with her roles and even though she can do any role anybody will throw at her, she gives it 100% and never lets anyone down with her performance. Honestly, I can’t think of a movie she has even given a mediocre performance in let alone a bad performance. This is the actress every young hopeful should aspire to be like…but she is one of a kind, so don’t be too harsh on yourself if you’re not.
Team Meryl all the way.
Review
It is not often a magnificent performance such as that of Meryl Streep in The Iron Lady is witnessed, so it is such a shame that it is in a film as mediocre as this.
Streep is amazing as once British prime minister, Margaret Thatcher, but the same cannot be said about the production of the film. Director, Phyllida Lloyd has just tried to do too much with the film and tried too hard to make it a masterpiece. All Lloyd had to do really was just to go for a simple flow, with the same cinematography and Streep would have carried the rest herself.
The Iron Lady documents ex British prime minister, Margaret Thatcher’s (Meryl Streep) rise to the top, her struggles whilst in power and the consequences of her dry ambition on her private life. We see the Thatcher of today who is still admired by so many people in Britain, yet continuously struggles with the loss of her husband, Dennis (Jim Broadbent) and with the feeling of detachment from her grown twins.
The Iron Lady has the potential to be a great film. The life of Thatcher is very interesting, but the way which Lloyd has made the film jump around from past to present and in between just makes it messy and there is no smooth continuation.  The film loses momentum as a result and can be slightly dull and even annoying.
One would also expect there to be times throughout the film where the audience would feel triumph for Thatcher, especially when she is elected prime minister even though she did not even believe there would be a female British prime minister in her lifetime. It is just rush, rush, rush so we can fit in the love and love loss story or her and Dennis into the same film. I’m sure especially the British would have preferred to have some overwhelming sense of national pride throughout the film.
There are some great moments of cinematography throughout the film, but it is at such quick pace that it is sometimes hard to notice it. The silhouette shots of Thatchers profile are quite effective.
However, the saving grace of the film is obviously Meryl Streep, who absolutely carries the film. This is one of her career best roles as she has everything about Thatcher perfected and her great case study into the role is extremely evident. She is particularly brilliant as the present day, older Thatcher and is heartbreaking when she is faced with the truth of the loss of her husband.
Jim Broadbent, who is also another actor who is consistently at the top of his game, is also very good as Dennis Thatcher. He is a fitting partner to Streep on the big screen.
Alexandra Roach plays the younger Margaret Thatcher and does a very good job at performing the transformation of the timid girl growing up to the confident new and sole female minister. It is a hard job to play a young Meryl Streep and you can tell the difference in ability when the film switches into Streep mode, but she does a good job nevertheless.
One can only hope that the film doesn’t have too much of an effect on Streep’s award chances, because she surely does deserve with this role.
6.5/10
Posted by NP1982 at 1:17 AM