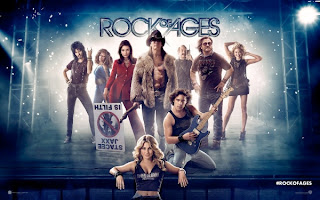 Before I begin my review….
Every time I review a musical (which I admit, isn’t too often these days), I always find it harder to do so than your typical film.

As I left the cinema after watching Rock Of Ages, I was trying to figure out why it is. I’ve came to the conclusion that it is because you have to be careful that you are critiquing the movie and not the musical. So you can’t really say how good the story is in a movie review because the story is the product of the stage musical, not the movie. You also can’t criticize the characters because the characters are also a product of the musical. You can of course change bits and pieces of the stage play to suit the big screen and that’s really what you have to do because a stage musical and movie musical are two different ball games. Stage musicals involve a lot more “over-the-top” performances so people in the nose bleed section can see the facial and bodily expressions. If you are as over-the-top in the movie, you get bashed by the critics for over-acting.

Yet, you really can’t change too much because fans of the musical feel ripped off when something they enjoy or a character they like is changed for the big screen. It’s much like adapting a movie from a book. Fans of the original like things to remain as close as possible, which is fair enough really. Although change can be good to make things work as opposed to making things flop.

Most of that is beside the point of what I was going to say. Reviewers such as myself have to be careful to just review the film musical and not the stage musical at the same time. I’m  not a theatre reviewer, yet that maybe an idea. Who doesn’t love a good musical?

That was a rhetorical question.

Review
It’s the film to excite every rock n’ roll fan and 80’s enthusiast.  Glam rock arrives to the big screen in spectacular fashion with Rock Of Ages.

Based on the Broadway musical which debuted in 2009, Rock Of Ages is a whole lot of fun with a great soundtrack and has been very well adapted for the screen. Rock music lovers will be in heaven hearing all their glam rock favourites sung by actors they would have never thought would be in a million years.

It is 1987 and rock n’ roll is alive and well on Hollywood’s Sunset Boulevard at The Bourbon Room. It is the place dreams are made of for Sherrie (Julianne Hough) and Drew (Diego Boneta), two hopefuls searching for fame and love. However, it may not be for much longer with their financial difficulties and threats from the mayor’s wife, Patricia Whitmore (Catherine Zeta-Jones) to bring it down. Lead singer of Arsenal, the infamous Stacee Jaxx (Tom Cruise) may just be the one to save The Bourbon Room.

First and foremost, Rock Of Ages is just plain fun. The great thing about this musical is that you don’t need to have seen the stage musical or be a fan of it to know the music and be toe tapping. The music is widely known in society and is very well adapted for the movie. Even if you are not a rock music fan, there is still a lot of fun to be had. Rock music fans will enjoy it that little bit more though.

The film has been very well adapted to the big screen from the stage. There are segments in the film that could not have been achieved on stage as well which enhance the characters stories, such as that of Dennis (Alec Baldwin) and Lonny’s (Russell Brand) flashbacks. The set’s used also take advantage of the bigger performance space to bring more to the film than is possible on stage, such as Stacee Jaxx’s massive dressing room and the feeling of actually being in The Bourbon Room with its stage, bar and dance floor.

The direction of Adam Shankman is to be commended. From the beginning when you see the beginning credits start and “Paradise City” playing in the background, you feel like you are about to witness an extravaganza and it makes you eager for the movie to get started.

In saying that, the film doesn’t really have a feeling of amazing achievement of the characters through it when they are breaking through in their careers. The ending isn’t really as inspiring as you would like, but it isn’t by any means bad. It just feels as though final number may have had a bit more to give.

The two lead actors in Rock Of Ages, Julianne Hough and Diego Boneta are good choices for their roles. However, it is clear that Hough’s background is more in singing and dancing than in acting. She can be a tad boring at times, and isn’t really the type of girl you would expect to be obsessed with rock n’ roll music. There is no denying she has a good voice, but seems a bit out of place in The Bourbon Room. However, if this is the way Sherrie is supposed to be on stage, then she should be that way in the film as well.

Tom Cruise completely steals the show as Stacee Jaxx. He is completely believable as the 80’s rock sex symbol and it would not surprise you if someone told you that he really was a rock star in the 1980’s. He looks the part and his mannerisms, such as his walk, are perfect.

Catherine Zeta-Jones also does well. She is very funny as the mayor’s wife and it is great to see her on the big screen again.

Alec Baldwin is very, very funny in his role. It’s a very different role for him, but he is extremely likable and his chemistry with Russell Brand is great. Brand, as always, delivers some stellar lines throughout the film.

There are not enough film musical’s going around these days, and Rock Of Ages is the film musical for those who are not usually fans of musicals.
7.5/10