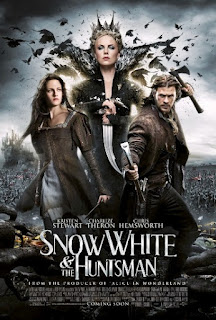 Before I begin my review…
Well, I guess right now in this world Snow White and the Huntsman is known to a lot of people as the movie where Kristen Stewart cheated on her boyfriend, Twilight co-star Robert Pattinson with her married director, Rupert Sanders. This is all pretty new news and a major subject of discussion in all the celebrity gossip magazines and websites at this present point in time.

Let’s face it, Movie Critical is not a celebrity gossip site and I am not going to take this opportunity to make it into one. Personally, I don’t really care to write a huge article on who said what and who did who in this instance. I’ve pretty much summed up in the above paragraph the gist of what has happened so I am not really going to go into the whole debacle much more than that.

The only thing that I am really pondering in this whole circus is, what will this do to Kristen Stewart’s career?

Will it make her more popular (if that is at all possible as she is the highest paid female actress around at the moment) and turn her image into that of a sex symbol? Or will her image be tarnished by her bad girl ways?

It’s hard to tell, scandals work in mysterious ways for stars. They can make your star rise or fall. I guess only time will tell. When Breaking Dawn : Part 2 is released in November, will we look at Edward and Bella differently knowing what happened in real life? Chances are probably not, but I believe there are some not very happy Twilight fans out there as a result.

Review
Snow White is a story that has been told many times over, but never the same as Snow White and the Huntsman.

Snow White and the Huntsman is the second Snow White film to be released in 2012 as Mirror Mirror starring Julia Roberts and Lily Collins was released earlier this year, but is completely different from its processor.  It is much darker and more of an action/adventure fantasy film than a fairy tale. The film itself is interesting to watch with some spectacular images, but lacks in the area of script and story.

Like all Snow White stories, young princess Snow White (Kristen Stewart) has been banished to the tower by her evil stepmother, Ravenna (Charlize Theron) who has taken the post of Queen upon the death of her father. When Ravenna finds out that Snow White is now the fairest of them all, she sets out to kill her. Instead, Snow White escapes to the forest and the Queen sends in The Huntsman (Chris Hemsworth) to bring her back to her. However, the Huntsman and Snow White join forces to destroy the evil Queen and win Snow White back her rightful throne.

Snow White and the Huntsman is visually a very good film. The cinematography combined with visual effects make what you see on the screen extremely impressive. The battle scenes are well choreographed and intense. The visual effects are quite extraordinary, especially that of Ravenna’s mirror. The castle, town and forest also serve as spectacular backdrops to the story.

However, the script lacks and the story suffers. This is a different version of Snow White than we are used to so the story needs to be entrancing and well defined. However, the script does not support the story and isn’t intense enough to keep the film interesting for its entirety.  Although the action sequences are great, they sometimes do slow the movie down and there are scenes where it feels like nothing happens which are just downright boring.

Kristen Stewart is not the most convincing Snow White you will see. She plays awkward and unsure well, but is not as endearing and “the fairest one of all” as Snow White is supposed to be. However, she does have two scenes, one in a white dress and her first battle scene, in which she shows that she may well have it in her to be more versatile than she has been in her films recently.

Charlize Theron is indeed the star of the film. She plays interesting evil so well and is actually very scary. She makes the film not really suitable for the typical children audience of a Snow White film. Chris Hemsworth is not at all bad. He is now part of the league of action stars at the moment so he is a good fit for the role of the Huntsman. However, he does have some great emotional scenes as well which add to his successful performance. On the other hand though, he and Stewart really have no on screen chemistry, romantic or platonic.

It’s hard not to judge Snow White and the Huntsman as a “Snow White” film and not compare it to other films of its kind that have been and gone. Yet even if you don’t, its pro’s and con’s measure evenly with each other.
6/10