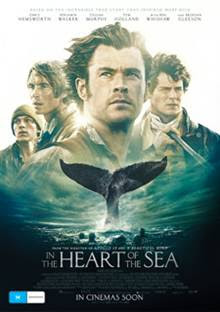 In The Heart of The Sea is now showing in Australian cinemas and is distributed by Roadshow Films. Opening in the United States December 11 and the United Kingdom December 26.

Ron Howard's ambitious tale of survival, In The Heart of The Sea is a visually stunning film that gives only momentary suspense, intrigue and emotion and when it does, it is more at the hands of the majestic sea creatures featured rather than their human counterparts.

Based on the incredible true story which inspired Herman Melville's classic novel "Moby Dick", In The Heart of the Sea is the recount of the disaster of the whaling ship, the Essex in 1820 as told by survivor, Tom Nickerson (Brendan Gleeson) to Melville (Ben Whishaw) many years after the event took place. Nickerson was just a young cabin boy when he was aboard the doomed ship that was captained by George Pollard (Benjamin Walker) who clashed with the First Mate being the more experienced shipman, Owen Chase (Chris Hemsworth). The Essex, which set out to retrieve whale oil, hears of a recently discovered whale hunting ground where they were sure to obtain more oil, but ignore the warnings of a monstrous, dangerous whale who is not intimidated at all by humans. The crew's voyage takes a disastrous turn upon meeting this mammal and then turns into a struggle for survival.

In The Heart of The Sea is a glorious film visually with wonderful special effects and breathtaking marine panoramas. The concept of bringing the story of the ill-fated Essex to the screen is an extremely ambitious project which could not have been achieved in a believable fashion until the right cinematic techniques were made available. The creation of the world beneath the surface is spectacular and brought to life with clean cut cinematography. It is the giants of the sea that are the true stars and highlight of the film. Despite being a product of CGI, one is entranced by the majestic nature of the beasts and feels greatly for them, including the "devil". This can make watching the characters participate in the act of whaling during the film rather distressing. The film itself does not glorify whaling, but rather presents it as an activity that was accepted as normal in order to obtain oil. Yet, this act does draw more emotion for the whales than for the crew of the Essex as they battle for survival. 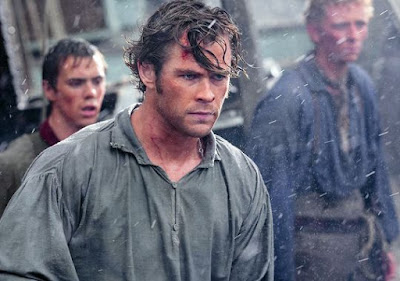 The emotion felt for the humans of the story is rather weak in comparison to the whales. Their survival techniques are indeed tragic, but they are not felt on an emotional level and are merely just acknowledged by the viewer. The suspense in the film is rather sporadic and are reserved, once again, just for the scenes involving the whales. It is true that the ending of the film is known right from the start as Melville is interviewing a survivor, but this is not an adequate reason to lose it's sense of tension as many films with a known conclusion are able to hold tension for the majority of it's run time. The lapses in tension are also lapses in intrigue and this leads to the film feeling rather slow, especially during the opening scenes which make the film appear slow to get going.

It would seem that with In The Heart of The Sea, Howard directs the natural world better than he does his actors for the large part. Brendan Gleeson is the stand out as his character of the older Tom Nickerson evolves from being hostile and extremely guarded to opening up to Melville and believably releasin years of inner torment. While Chris Hemsworth is top billed, his performance can be described as just fine. He is solid, but it is not anything we haven't already seen from Hemsworth in previous films and does not break any ground for him as an actor. However, Hemsworth remains likable and a fine leading man. Cillian Murphy is very good, but does not have as much screen time as he should to make a proper impact in the film.

In The Heart of The Sea is a film that could have been made years ago had it not been for it's need for the specialised CGI and special effects that are present today. However, these features are truly the best things about the film and it's spectacular scenes with the whales will be what it s remembered for.