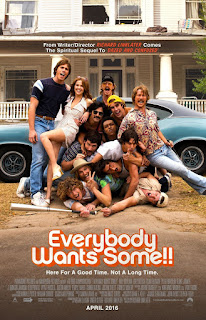 Year: 2016
Running Time: 116 minutes
Director/Writer: Richard Linklater
Cast: Blake Jenner, Tyler Hoechlin, Zoey Deutch, Ryan Guzman, Dora Madison, Wyatt Russell, Glen Powell, Jonathan Breck
Everybody Wants Some!! premiered March 11 at the 2016 SXSW Film Festival
in Austin, Texas. Additional SXSW screenings will be held on March 12 and 18.
Everybody Wants Some!! will receive a theatrical release by Paramount Pictures in the USA on April 1 and by Roadshow Films in Australia on June 23.
Movie Critical 's guest correspondent, Anna Chu was on hand at the World Premiere of Everybody Wants Some!! at SXSW and we thank her for taking the time to share her review and thoughts on the film and the special Q&A with the cast and crew.
As soon as the first chords hit, I knew I was going to be up for a good time.

Richard Linklater’s Everybody Wants Some!! is a love letter to the 1980s in Texas. As a kid born in the 1980s I felt I was transported back to a time I didn’t really know intimately, yet it was familiar enough that it made sense to me. As soon as I saw the lead character on screen Jake (Blake Jenner) wearing the same exact tight blue t-shirt my dad wore in a photo from the early 1980s when my parents were dating, I knew Linklater was meticulous at wardrobe!

I was lucky enough to attend a screening during the opening night of the 2016 SXSW Film Festival, and during the Q&A the cast shared that their prep to ‘being in the 1980s’ was through music. Linklater would send them a mix of music to listen to and because of the collaborative nature of the filmmaking process, the cast would often suggest tracks to add to the soundtrack. Richard Linklater AKA ‘Rickapedia’ would know that track wasn’t released until 1981. The soundtrack was excellent from the opener of ‘My Sharona’ to Devo – these were all key elements in successful time travel.

So where exactly did this time machine take us to? The year is 1980, the place is East Texas and the scene is freshman year for Jake, moving into a Frat house for the college baseball team. Jake arrives with a milk crate full of records and a bag that clearly doesn’t fit the wardrobe he actually wears, but let’s not let that detail get in the way. I’m not going to list all the characters’ names and their personalities but suffice it to say, you’re better off if I don’t because getting to know these guys is the most fun part of this movie. I can only imagine that dudes would relate to this movie if they have ever been in a clique. And I realise as I type this that dudes would never call their group a clique, which says more about me. That aside, I wish I had a bromance friendship like that, where pranks are forgiven with no grudges, and competitiveness is all part of the fun. As a girl growing up, it was a lot more political, fights became long feuds and you had to take sides. With these baseball players, it was all about getting laid, and having a good time with your bros. 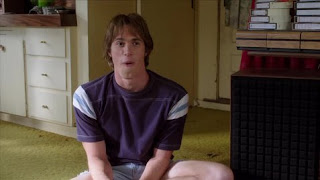 Having only been to Austin once before, I couldn’t quite relate but someone in the audience did, commenting to the cast and director on stage that the film did a good job of taking us through different genres of music that were a big part of Austin, from disco to country, punk to pop. It felt a little convenient at times that they had a party every night that helped us relive these genres of music in their heyday but I didn’t mind. The singalong of ‘Rapper’s Delight’ by the Sugarhill Gang was worth it.

From a plot perspective, there wasn’t too much of one which is typical of Linklater’s films. However, a basic summary would be: Guy graduates from high school, goes to college on a baseball scholarship, and the weekend before he starts school he has an amazing weekend with his new housemates, partying, drinking, meeting chicks and in particular one he really likes. Which on paper sounds like an average weekend for some, but was made so much fun with each of the different characters. The shit-stirring, the pranks, the camaraderie which one time got them all kicked out of the club because one of your mates got a little too agro at the bartender about having a lime in his screwdriver. There wasn’t too much time to develop each of the characters, but I didn’t really notice it. Each cast member was given just enough time to shine, without overtaking each other. The camerawork had a lot of one-take panning which while typical of Linklater’s style, helped us feel like we were just there in amongst the gang. I really felt like I was one of the dudes, sitting in the Frat house lounge, laughing at a game of knuckle-flicking mercy and hoping this summer would never end.

I couldn’t help but feel that Linklater cherry picked the best parts of the summer of 1980 in this movie. It couldn’t have been great that whole weekend! Yet this film is more like a love letter from an ex-boyfriend who wants to get back together again, only remembering the best parts of your relationship as a promise of what’s to come.  That is the great thing about nostalgia, and with that Everybody Wants Some!! does its job. Let’s put some polyester on and take a trip back to the 1980s!