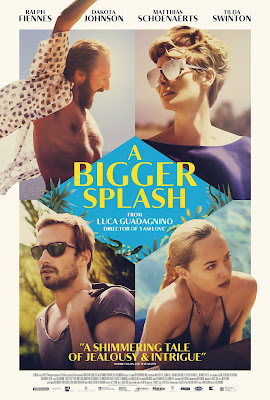 A Bigger Splash is now showing in Australian cinemas and is distributed by Studiocanal.

Lucas Guadagnino's The Bigger Splash is a slow-burning, sexually charged film about heightened emotions that is a stunning achievement in cinematography and editing.

After singing sensation, Marianne (Tilda Swinton) undergoes throat surgery, she takes a much needed therapeutic vacation to the Italian island of Pantelleria with her boyfriend, Paul (Matthias Schoenaerts). Their time of much needed and glorious solitude is disrupted when Marianne's past love and record producer, Harry (Ralph Fiennes) arrives with his daughter, Penelope (Dakota Johnson). What was supposed to be an idyllic and uneventful summer of rehabilitation for Marianne and Paul turns into a time of temptation, hostility and jealousy.

Based on the Jacques Deray's 1969 film La piscine, A Bigger Splash lives up to it's name as it's impact is greater felt than in the original. Guadagnino's film is a psychological, sexual thriller which slowly simmers it's way to the inevitable showdown between all the characters. It's incredibly slow pace and techniques of building tension using symbolism and unique cinematography is particularly Hitchcock-esque and one would believe that if Hitchcock himself were to make a modern day film set in such a setting, it would greatly resemble A Bigger Splash.

Those who are strong in their belief of film as art will revel in the film's finer qualities and enjoy the slow burn nature it possesses, while those who prefer a heightened sense of tension by way of a fast moving thriller will not understand the appeal of A Bigger Splash. However, both parties will agree that the film is approximately 20 minutes longer than it should be with the final few scenes feeling unwarranted and misplaced. Yes, the film is a slow burn....until it reaches it's explosive conflict and suddenly everything speeds up. It is obvious that there is a point to including these final scenes, but they do feel out of place with the majority of the film. 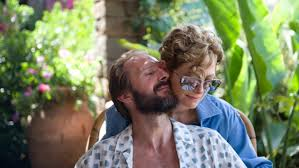 A Bigger Splash has an unique way of looking at human qualities such as jealousy, addiction and temptation. The choice made for Tilda Swinton's Marianne to technically have no voice is a particularly interesting one. By taking away something like the gift of speech, it paves the way for other modes of communication to be heightened. This symbolises how while the characters may not always be saying how they are feeling, their emotions are showing loud and clear in other ways. The cinematography helps one to see these feelings where it is needed using particularly interesting means of doing so such as focusing in on certain images and using camera angles to give the viewer the same view as the characters in the film.

One cannot deny how aesthetically pleasing A Bigger Splash is. The location shots for the film are absolutely exquisite, but also create an atmosphere where one feels the dangerous and tempestuous air in paradise. It is easy to imagine what forbidden things could take place on an island such as Pantelleria, as it is comparable to the Garden of Eden with the temptation of the forbidden fruit. Adding to the beauty of the film is the wonderful costume design by Guilia Piersanti, particularly that of Swinton's wardrobe.

Tilda Swinton gives a stunning performance as glam-rock star, Marianne. She is particularly superb given her lack of dialogue due to her character's loss of voice and when she does attempt to speak, the frustration of her situation (or situations once you include the fact that her old flame is crashing her love nest) is evident. Matthias Schoenaerts does well by bringing to light the sheer awkwardness of the situation and trying to handle his addiction recovery by not giving into temptation when it is all around him. Dakota Johnson is fine, yet her character is an object of temptation for the men of the film and perhaps her sexuality is a little too obvious. She more often than not wears see-through clothes, when her sexuality would be just as obvious with a bit more covered up.

Ralph Fiennes is surely the star of the film with his life of the party character. The highlight of the film (as was it's premiere at the Venice Film Festival) is Fiennes' dancing to The Rolling Stones. Besides his dancing, he gives an inspired performance with a great deal of character. Harry may seem incredibly likable and fun to be around, but he is actually quite a destructive human being both to himself and others. He draws people in with his charm and then shows his true colours and remarkably he knows this and is unapologetic.

The slow burn nature of A Bigger Splash will divide audiences, but it's visual elegance is hypnotic for even non-believers.