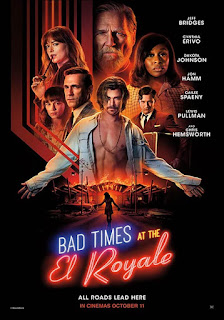 Entertaining and delightful at face value and excellent beneath it's surface,  Bad Times at the El Royale is a rare gem of cinema that turns deception into a stunning and enjoyable piece of art. With it's array of superb performances and it's nostalgia-charged production, this film says a great deal more than it does on it's already fascinating surface.

Written and directed by Drew Goddard, the film starts off by deceiving it's audience into believing that they will be watching an Agatha Christie-esque story set in 1968 play out on screen. A group of strangers arrive in a seemingly deserted hotel on the California-Nevada border that was once the scene of many a party of the Hollywood elite, but now only contains the ghosts of it's glory days and a sinister and sleazy atmosphere thanks to the retro lighting, dark corners and a bell boy (Lewis Pullman) who is never quite present.

We are introduced to each of these mysterious travellers and, as is unfortunately human nature, judgement is swiftly passed on each one of them as we note their flaws and attempt to guess what their story is. Bad Times at the El Royale does look like a typical thriller, so that is what our minds have been trained to do when watching such a film. However, once Jon Hamm's egotistical salesman, Laramie Seymour Sullivan reveals himself to be quite the opposite, the story quickly reveals each of the characters and their situations to be quite different than what we assumed and that is when the film reveals itself to as far as possible from a Christie novel.

Bad Times at the El Royale is unpredictable in the most unpredictable of ways. The screenplay is not only well constructed with spectacular character development and an intriguing and suspenseful story, but it also presents us with something of a realisation about ourselves. Bad Times at the El Royale does something very few genre films do and that is it makes us stop and question the relationship between what means we use to solve a mystery and how judgemental we are as humans. We are so quick to predict the motives of the characters based on what we see them doing, their professions, how they talk and how they are dressed, that it is only time that reveals that things really are not as they seem and there are very few characters are what they seem. In addition to that, there are so many complex personalities that also make you question what makes a good person or a bad person, and does it all just depend on circumstance? 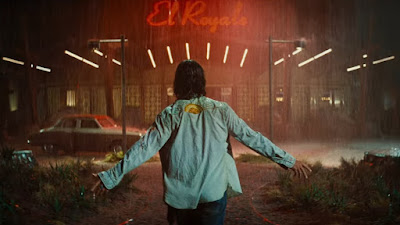 It is a brilliant method of deception by Goddard, but it also reminds how we pass judgement on everyone we meet. It is a horrible part of human nature to base judgement on first impressions and it often takes something, such as Bad Times at the El Royale to remind us of this.

However, the associated guilt of this realisation is almost welcomed as Bad Times at the El Royale is so well done. At it's 2 hours and 21 minutes running time, it is a roller coaster of a film with a steep ascent for the first hour to build suspense, followed by fast paced twists and turns. The incredible production design of the El Royale is absolutely mesmerising.  Yet, it is Cynthia Erivo as struggling, down on her luck singer, Darlene Sweet that is completely and utterly spellbinding. Erivo owns every scene she is in and with her own hand, almost brings the film into the musical genre. Like a performance in such a genre, she not only has an amazing singing voice, but she is able to portray her character through song as well as her dialogue.

The film also benefits from star performances by Chris Hemsworth, who once again proves his versatility by becoming a terrifying Charles Manson-like manipulative. Lewis Pullman also gives a head-turning performance as the bellboy, Miles Miller, a character who is one of the true surprise packets of the film.

Bad Times at the El Royale is whole load of fun and a true creative joy. It makes the unforeseeable link between how we watch a thriller and how our minds work as humans and does it in entrancing fluorescent lighting style.