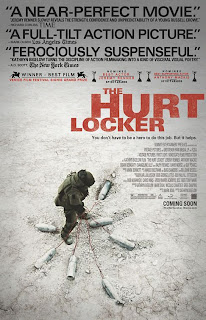 In My Own Words
There is nothing about “The Hurt Locker” that isn’t intriguing, both on screen and off screen. Even before I saw the film, the idea of a woman directing a war film, traditionally a male genre, is more than interesting. The fact that Kathryn Bigelow has done it so well and has earned an Oscar nomination for her efforts is astounding and something to be celebrated. She is only the fifth woman nominated for Best Director and has a huge chance of taking away the honour. Even more intriguing here is that her main competitor is her ex-husband, James Cameron. The competition of two ex-spouses for the honour of Best Director is unprecedented and it is a long shot that it will ever happen again. However, the two are amicable and Cameron is even said to have encouraged Bigelow to undertake the project of “The Hurt Locker”. Upon receiving his Golden Globe for his direction in “Avatar”, Cameron admitted that he thought Bigelow was sure to beat him to the honour.

Whether “The Hurt Locker” is a female directed film or not is completely beside the point as to why the film is such a masterpiece. My personal experience with the film was that felling of holding my breath for the whole film and when the credits start rolling, I could finally exhale. At times I was completely uncomfortable due to the onslaught of tension and nervous anxiety. It was one of those films where I felt like I wanted to run out of the cinema in order to be released from the films tight grip of me, but I knew I could not do that and feel comfortable in not knowing what was coming next. Besides a sore neck from the stress, the film also gave me a new perspective on what the soldiers really go through while in a war zone and the dangers and horrors they encounter everyday.

Review
“The Hurt Locker” could well be the movie of the year and is definitely in contention for the academy’s grand prize. It is very rare for a film to come along in which it is a struggle to find no fault with, yet this is one of them. A movie that is climatic from the beginning till the end is indeed a rare find. “The Hurt Locker” shows the ugly and evil side of war, yet the film is so beautiful. The film is non-stop action and suspense from start to finish, extremely confronting and not for the faint hearted. In Iraq, a group of Americans participate in the bomb squad and are met daily with situations that could end their lives. Each day they are met with different dangerous situations and are faced with the concept of their own mortality.

The film itself does not have a straight story line, but is more a way of putting the audience in the shoes of these soldiers. Instead of having a beginning, middle and climatic ending, the whole film is a climax. The audience is completely on edge constantly and there is no sign of the end of the film until the credits start rolling. However, the lack of a whole and traditional storyline does not bother anyone. The film is a masterpiece to watch. The cinematography and editing are absolutely superb. It is a credit to Kathryn Bigelow as a director the way she has constructed her film. It is not a traditional war film, as it is not driven by acting and shooting, but rather by the anxiety of knowing that everyday you wake up in an area where a war is, everyday could be your last. How do they make it through each day knowing this and knowing that this is all part of your job? Some soldiers are completely disturbed by it, while others are oblivious to it. “The Hurt Locker” shows that no one is immune to weakness and it is not possible to be strong 100% of the time.

Jeremy Renner, who plays the lead as Will James, is superb and is well deserving of his Oscar nomination. He is witty and smart, and constructs both a strong and weak character. Anthony Mackie and Brian Geraghty play his sidekicks in the field and are both superb in their roles. The character development of the main character, Will James is fantastic. Again, it is not the traditional character development just at the beginning of the film, the development continues throughout the film thanks to a wonderfully written screenplay by Mark Boal.

The special effects that are used for the bomb blasts can almost be described as beautiful, if they were not being used for destructive purposes. The first blast in unforgettable and sets the stage for a beautiful, yet horrifying movie. There are many gasps throughout the film and at no moment do you feel safe watching these characters put their lives on the line. There are no guarantees of anyone being spared throughout the two hours. The suspense which the audience feels and the intense emotion felt are indications of how amazing the film really is. Congratulations Kathryn Bigelow, you are a genius.
9.5/10