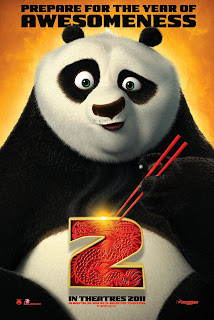 Kung Fu Panda 2
Year:  2011
Director: Jennifer Yuh
Cast: Jack Black, Angelina Jolie, Dustin Hoffman, Gary Oldman, Seth Rogan, Lucy Liu
In My Own Words
Actors must love animation roles. Sure, the obvious reason for loving them is that it provides an easier alternative to their usual on screen acting by only have to act using your voice rather than having to link it up with believable facial expressions and having to worry about where you are standing in relation to your co-stars. The reason I think animation roles are great for actors is because it gives them a great comeback when critics say “(insert name here) plays the same role all the time” and “ Such and Such isn’t a very versatile actor”. What a great way to prove them wrong! Provide the voice for an animated animal on the big screen! That will always provide a “different” role for you on the big screen!
For example, Jack Black. Someone says “Jack, you are playing too many of the same roles. You always seem to be playing the guy who no one, including themselves takes seriously. You need to branch out to other roles”.
Black says “Okay. Well, my next role will be about another underdog who no one takes seriously, but this time I will be a….PANDA!” (this isn’t actually a quote from Mr Black, this is just theoretical).
I’m sure it’s not the versatility that critics are after, but at least it is fun for the actors, and it is a good comeback if someone says you play the same role all the time. “Oh yeah? I play the same role all the time? Well, when was the last time I played an aardvark? When have any of my roles resembled that of a big nosed creature on it four legs obsessed with eating ants?”
These are my own words and here is my review.
Review
“The sequel is never as good as the original”.
This is most probably what the majority of people would have been thinking about Kung Fu Panda 2, and they would have had good reason to as it is not often that a sequel comes anywhere near the quality of the original (The Godfather II  a major exception). However, it is a pleasant surprise to find that Kung Fu Panda 2 is just as good as the original, if not better. The animation is brilliant, script funny and it appeals to all ages.
Po the Dragon Warrior panda (Jack Black) is back with his Furious Five team of kung fu warriors. When he finds out that the famous warrior, Thundering Rhino has been killed in Gongmen City  by the evil peacock, Lord Shen (Gary Oldman) and his pack of wolves, he and the Furious Five set off to free the city from Lord Shen’s evil ways. Before leaving the Valley of Peace, Po was a “shocking” discovery that he is adopted and that his noodle cooking goose (he is actually a goose, not a silly person, although some may object) father, Mr Ping is not really his father. Po has reason to believe that Lord Shen knows who he really is and where he came from. To Po, this awesome mission is now personal.
Animation in cinema has come a long way since the first animated feature length film, Snow White And The Seven Dwarves in 1937. The quality of the visuals in Kung Fu Panda 2 are very impressive. The action scenes are almost up to the standard of those which you would see in a non-animated action film. It’s not just the action scenes that make you forget that you are watching an animation, there are several nature visuals which you could easily mistake as being that of photography.
On the other hand, there are then some scenes which resemble a video game, such as when Po is running through the streets of Gongmen City. This isn’t a bad thing, as this video game likeness makes the film a great deal of fun.
Kung Fu Panda 2 doesn’t just rely on its visuals, it is also accompanied by a very funny script. It has a very sarcastic and random sense of humour to it with some very funny scenes and dialogue. The ending is a bit frustrating however. Although, you can understand why the film makers made it that way.
The best performances in animation films are those who can disguise their voice to the point where you really can’t guess who’s voice it is you are hearing. Jack Black is the main voice and you can tell he has a lot of fun with the role. It is perfectly suited towards Po. Angelina Jolie is extremely controlled as Tigress and Dustin Hoffman, quite the peaceful master. It is Gary Oldman who does the best job. He tackles new territory as the voice of Shen and is completely disguised in the character. That’s the way it should be when an actor supplies their voice to a film, there should be a sense of becoming someone you’re not, even if it is just by using a different voice to your own.
Kung Fu Panda 2 is a sequel out of the ordinary. Funnier than the first film and more suspenseful than many non-animated films. A great film for the holidays for families and adults alike.
7/10
Posted by NP1982 at 10:27 PM