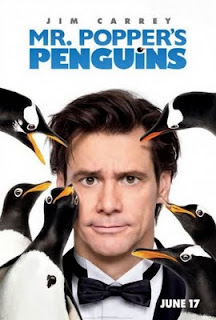 Mr Popper’s Penguins
Year: 2011
Director:  Mark Waters
Cast: Jim Carrey, Carla Gugino, Angela Lansbury
In My Own Words
I feel like Jim Carrey was the comedian I grew up with. It’s hard to believe that it has been 17 years since Ace Ventura: Pet Detective was released. I was quite young when it came out so I didn’t get a lot of the jokes in it, yet I always loved Carrey’s impersonation of the Miami Dolphins mascot which he was trying to track down. Then came The Mask and Carrey secured his status as a superstar. I loved The Mask, still do actually. I love the comedic timing in the film. As the loser Stanley Ipkiss, he is absolutely endearing and you hate how much he gets kicked around. Put on his mask and he is a chauvinist, but absolutely hysterical.
Since 2004 he has an impressive portfolio of comedy films, as well as a dabble in dramatic films such as the critically acclaimed Eternal Sunshine Of The Spotless Mind. He has slowed down with his films in the past few years, so when he appears in a film, he is such a crowd drawer. So many of my friends were over the moon when Yes Man was released in 2008…including me! It was like our old Jim Carrey back. I only wish in 2011 he could have done the same.
These are my own words and here is my review.
Review
Mr Popper’s Penguins is a good entertaining holiday movie. However, if we remove the fact that this film was a film released during the school holidays, it would be neither good nor entertaining. It is a good movie for the time in which it has been released. Mr Popper’s Penguins is “G” rated so it is a good family film for those parents looking to keep their children occupied for at least an hour and a half of their holidays. Otherwise, it is good for little else really.
Tom Popper (Jim Carrey) is a high flying New York businessman who fills his life up with work to avoid thinking about the painful past. He is divorced, but still has feelings for his ex wife Amanda (Carla Gugino) and his children, Janie (Madeline Carroll) and Billy (Maxwell Perry Cotton) naturally expect him to let them down. When he inherits six penguins from his deceased father, Popper’s life is turned upside down. His work life suffers, but he starts to become the father he always should have been…..to both his children and the penguins.
You can clearly tell that Mr Popper’s Penguins is supposed to be a cute and funny film. One would think with six penguins that it would be a cute and fluffy film. Yet, there are very few cute moments. There is more penguin toilet humour than anything else, which may be your sense of humour but penguin toilet humour hasn’t been too successful in the past as this film will back up. There are some cute moments far and in between, but not many moment where you feel like you want to pick up and cuddle the penguins.
The script is just very weak and besides the penguins doing their business everywhere and their fluctuations, the jokes are very old, transparent and predictable. Perhaps the best thing about the script is picking up on all the old Hollywood references such as that of the penguins watching Charlie Chaplin, Mr Popper being likened to Howard Hughes and Mr Popper’s imitation of James Stewart. It may be the presence of Angela Lansbury, who was a star of the golden age of Hollywood herself that prompted these references.  On the other hand, this may be the film’s way of keeping the adult audience happy as well as the young, and some people still may not get these references.
The main thing you have to say about Jim Carrey in this film is that it isn’t vintage Carrey material. There are so many Carrey facial expressions and comedic material that are used in this film which are not relevant at all and are only included because that is what Carrey has always done in better films. It isn’t his worst acting in a film, but light years from his best.
Truth be told, there isn’t really any stand out performances in this film. Angela Lansbury is perhaps the only performance worth mentioning in a positive light, but her character isn’t given anywhere near as much screen time as is warranted.
The problem with the characters in this film is that there is no chemistry or emotion between any of them. Carrey and Carla Gugino just look awkward and mismatched on the screen at all times  and there is only talk of the fatherly love he starts top show towards both his children and the penguins, but no actual proof in the performances. However, Madeline Carroll does show a hint of potential in this film for the future.
Mr Popper’s Penguins doesn’t achieve anything it sets out to. The only thing it succeeds in doing is filling up an hour and a half of summer break in the northern hemisphere and a winter’s day in the southern.  Still, clean family fun.
3.5/10
Posted by NP1982 at 3:08 AM