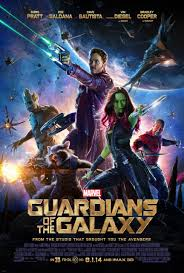 Guardians of the Galaxy is a superhero film in a league of it's own. While being the action packed extravaganza one comes to expect from it being a comic book adaptation, the film has it's own identity which sets it apart from other such films and make it extremely memorable and enjoyable. It's personality resonates through it's witty script, impressive visuals, colourful characters and an incredibly addictive soundtrack. Guardians of the Galaxy is in itself an addiction as the feeling of excitement it creates and it's fun atmosphere is one that is remembered and has a great staying power.

Peter Quill (Chris Pratt), a human living in a far away galaxy who was abducted by an alien life form when he was a young boy, is disturbed by Ronan the Accuser's (Lee Pace) men while stealing a mysterious orb. Upon returning to his home city, he finds he is now a wanted man being tracked by not only Ronan's enigmatic follower, Gamora (Zoe Saldana), but also by bounty hunter racoon, Rocket (voiced by Bradley Cooper) and his offsider, Groot (voiced by Vin Diesel). When the four land themselves in prison for their public battle, they team up with Dax the Destroyer (Dave Baustina), who has revenge on Ronan on his mind and see's Gamora as his key to vengeance. However, when this group of misfits discover that Ronan desires the orb so he can destroy the galaxy, they work together to defend their world from his evil plans.

Guardians of the Galaxy is a film with a whole lot of character. The film has absolute confidence in what it is and makes the most of what it has to offer. The film is slightly reminiscent of past films such as Star Wars, but it very much has it's own identity. All the elements of the film work wonderfully together to give the film it's own distinct feeling, which is that of excitement, fun and just a sprinkling of nostalgia thanks to Peter Quill's mind still partly dwelling on Earth in the late 1980's. Guardians of the Galaxy doesn't have the same luxury that many other comic book superheroes do which is that unless you are an avid comic book reader yourself, you are not entirely, if at all familiar with the story of the guardians. This works in the film's favour as there is nowhere near as much pressure or expectation on the characters and it is just a pleasure to enjoy getting to know the guardians and understand their world naturally. It really was an ambitious venture by Marvel to create the world of the guardians, but due to some incredible production design it is done brilliantly. The visuals are intriguing and have a wonderful incorporation of colour. The CGI special effects are also quite magnificent. 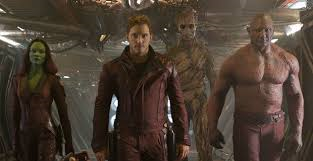 The screenplay is wonderfully written by James Gunn (who also directed the film) and Nicole Perlman. The story can be a little too busy to begin with while the guardians are forming their alliance, as so many people seem to be wanting Peter for their own reasons. However, once the five join forces the story flows and is intriguing and, to an extent, unpredictable. Although thrilling and action-packed, there is an incredible amount of witty and hilarious dialogue with lines that can be rather quotable. The great thing about the comedy in this film, is that it is not the usual comedic style featured in an action/superhero film which borders on corniness. Much of the comedy in Guardians of the Galaxy wouldn't be out of place in a comedy genre film. The only problem with a lot of the comedic references is that they are quite generation specific. Jackson Pollock and even Kevin Bacon's 1984 Footloose are not references that many younger viewers will understand, but much of the film will be a great deal more relatable to people who grew up in the 1980's in general. The use of the Walkman and particularly the soundtrack give an air of nostalgia to the film. The soundtrack is indeed one of the most memorable features of the film. There is a great mix of tunes from the 1960's, 70's and 80's , which are very well incorporated into the film starting with "Come and Get Your Love" by Redbone to set the scene for something fun and "Cherry Bomb" by The Runaways to build excitement.

The characters who are the Guardians of the Galaxy are all very well constructed and developed during the film. Chris Pratt is perfect as Peter Quill. He is so incredibly relatable and performs his role with absolute ease. His character is quite an interesting one, as he has an incredible amount of boyish charm and slight cockiness which doesn't come from thinking he is special as much as from there being a part of him which refuses to grow up. This is surprisingly really quite a likable quality in him and he charms the audience with this. Pratt's Peter Quill is one which you want to see more of and see more heroes who areas relatable as him.

Zoe Saldana does well as Gamora and is a strong female, action character, which is again the type of character one wants to see more of in action films. She works very well with Pratt on screen and although there is romantic chemistry between the two, the chemistry of them as partners in crime is much stronger. Bradley Cooper gives a superb voice performance as raccoon, Rocket. What is so brilliant about his performance is that for the most part his voice is unrecognisable as Cooper's own, which those familiar with his work would be used to hearing. Cooper gives Rocket true character with his voice and makes Rocket an even more intriguing raccoon than what he already is. Another surprise is Vin Diesel as tree/human mutation, Groot. Groot only has three words to say throughout the film, but Diesel's voice is unrecognisable in those three words. Groot is a wonderful character and with such little speech, comes across as being such a sweet being and an audience favourite.

Guardians of the Galaxy oozes character and is a truly enjoyable ride. It leaves you craving more and awaiting it's sequel with baited breath so to experience more of the fun had in the first and have further contact with it's wonderful characters.