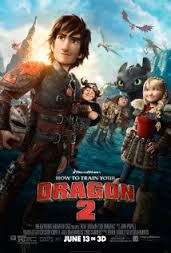 Although How To Train Your Dragon 2 does not feel quite as significant as it's 2010 parent, it avoids the usual sequel pitfalls and makes for a fun and entertaining watch. The film manages to do what so many animated sequels fail to do and that is to admit that it's lead character is growing up and develop him accordingly. There is unsuspected emotional depth during the film, but the majority of revelations that occur during the film don't meet the same level of originality that they do in the original film.

The film meets up with Hiccup (Jay Baruchel) and his faithful dragon, Toothless four years after the two first united and proved to Hiccup's village Berk and his chieftain father, Stoick (Gerard Butler) that Vikings and dragons could live together in peace. When Hiccup and his girlfriend, Astrid (America Ferrera) encounter a dragon hunter by the name of Eret (Kit Harrington) and his crew, they find out that an enigmatic and old enemy of Stoick, Drago (Djimon Hounsou) is assembling a dragon army. With Hiccup feeling the pressure to take over as chieftain of Berk from his father, he feels that he must step up and convince Drago that dragons and humans can live together and stop him from declaring war.

How To Train Your Dragon was a whole lot of fun, and How To Train Your Dragon 2 brings more of that fun. The story itself is more serious, yet because the revelations in the film are not that dissimilar from the original it misses out on feeling as significant as what it could. In the original film, Hiccup tries to convince his elders that dragons are not the evil creatures they believe they are and in this film he is trying to convince another group of people of this. Of course the ways which he achieves this are different in the two films, but those who have seen the first film will feel like they have just seen a different version of the first rather than a new adventure. However, the similar storyline is disguised as the characters have grown and developed, particularly Hiccup. Many sequels (animated sequels in particular) will present their characters as not far gone since the last film, but Hiccup and his friends have grown up and are now adults rather than awkward adolescents. It is refreshing to see that the main character has developed with time passing rather than it be the same character with the same attributes that we knew before. Hiccup's basic personality traits remain unchanged, but you can absolutely tell the difference the time passed has made. 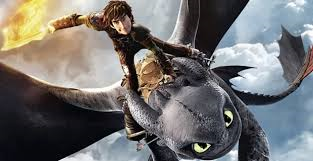 One thing that How To Train Your Dragon 2 does more than it's predecessor, is that it is a more emotional experience, especially at a particular moment in the film. As a result of this and the maturing of the characters, this sequel does feel like it is not as much directed towards children as the first film. The lack of younger characters in the film make it harder from children to relate to the situations in the film, but Toothless and the other dragons still do enough to keep younger audiences attention. The story itself isn't complex enough to categorise it as a film for adults. It wavers somewhere in the middle, which is more an observation than a positive or negative as the film is still entertaining. The animation is impressive and the final dragon battle scenes spectacular.

When one is familiar with Jay Baruchel's work, How To Train Your Dragon 2 does not seem like he has really stretched his boundaries. He doesn't do a great deal with his voice, as was also the case in the first film. Listening to him as Hiccup is basically listening to Jay Baruchel as he is in every other film. Yet, besides the lack of versatility to Baruchel's vocal performance, there is no denying that he is Hiccup and any other voice wouldn't add to the character the way his does.

Gerard Butler and Kit Harrington do vocally what they are best at. Butler is being a heroic Viking who strives on action and glory and Harrington is a adventurer on a quest to protect. Cate Blanchett's vocal performance is quite intriguing. Playing Hiccup's long lost mother, Valka, her accent can come across as a strange mixture of several dialects. However, what she does do with her voice is perfect for a woman who has only had dealings with dragons for decades. She is hesitant and slightly restrained as she comes to grips with speaking to humans again, which works very well for her character.

How To Train Your Dragon 2 may not reach the heights which the first film does, but it is still entertaining and fun. It's originality lies in it's character development from one film to the next rather than in it's storyline.