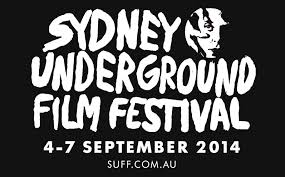 Without a doubt, the Sydney Underground Film Festival is one of the most, if not the most daring film festival on the festival calendar. Each year the film festival aims shocks their audiences in as many ways as possible with it's ambitious yet often disturbing program and 2014 is guaranteed to do no different. The Sydney Underground Film Festival aims to go where other film festivals won't dare and showcase the quirky and bizarre, but also the highly original and brilliant.

This year's festival at the Factory Theatre will kick off on the 4th of September with a screening of the New Zealand horror-comedy, Housebound and performance by Renny Kodgers. After four days and over 100 films, the festival will close on the Sunday night with the controversial and much talked about German feature, Wetlands.

Sydney Underground Film Festival director, Stefan Popescu took the time out of his busy preparation for the festival to have a chat to us about what to expect at this year's festival and what are the films to see.

So Stefan, how are you feeling with the Sydney Underground Film Festival just around the corner now?

Oh it is always just a little bit of a stressful time, but also very exciting. The adrenalin is pumping!

How do you feel the 2014 festival has broken new ground?

With the short films actually strangely. We're playing some really, really risky short films...if they even get through. I mean there is a really big chance the Office of Film and Literature Classification will ban some of the shorts. Hopefully they don't, they are looking at them right now. I think the shorts are really, really pushing a lot of boundaries.

In terms of the features, the one thing I can say is I don't know if it is the economic climate but there is a bit of a return to a more independent style of filmmaking. So it's interesting, even to the point of The Green Inferno where they are pulling it from distribution in the US and how they are handling it. I think Eli Roth had a big hand in not letting distributors getting their hands on it there. It is an interesting climate for filmmaking. There are more documentaries which is another sign of independent filmmaking. I think because of the accessibility with technology now.

So there are some films in the shorts program which are being looked at in terms of whether they are appropriate to be shown at the festival?

Yes, the Office of Film and Literature Classification are really scrutinizing the shorts particularly from The Best of the Fetisch Film Festival part of the program, but there are also a few from the Love/Sick part of the program which they are also looking at. I think they are really concerned when it comes to sex and/or violence. In particular, there is one called I Am Monster which they are really scrutinizing. I mean The Best of the Fetisch Film Festival is really graphic at the best of times and I Am Monster is really twisted. It's about a woman and necrophilia, but strangely that one is actually quite comedic.

What has the process for selecting the films which are part of this year's festival been like?

Well, it's been pretty similar to what it is like every year. We start from basically what's been submitted to us, so we never really have a major preconception and that's also why our program is always released a bit late. We actually go through all the films, have a look and see what we respond to, then take those and then start to see the themes that form. So we develop this early on so that we can keep the program really fresh and up to the time, rather than have preconceptions from what other film festivals and it's also a way of distinguishing our program too which is curated from production. Initially you see themes that form and things like that. So this year it seems to be a strange combo of horror/comedy and intimate pieces with interpersonal relationships. A lot more profound that what it usually is. Along with horror we do have that theme of the end of the world, like we have a documentary about living forever and then we have all these apocalyptic short films. You always seem to get two or three themes that stick out.

Can you tell us a bit about the "Dead Oscar"?

Oh yes! That was from the beginning a local artist, Mark Wotherspoon, who developed these trophies for us made out of recycled TV screens. Basically we thought that we don't really like the idea of prizes, so we thought that having the Dead Oscars would be a good idea!

Absolutely! So what type of film could win the Dead Oscar?

Oh whatever the jurors deem fit to win it! We still have jurors and they usually go through it and create their own awards. I guess it's about what resonates more with them. Then they sort of commend a whole bunch of films. This year's jurors are Nicholas Hope, Lauren Carroll Harris and Neil Foley. We sort of try and get a mix usually of artists. We like actors because actors normally know their art quite well. We do have an Audience Choice Award, so we have a couple of Dead Oscars to give away. The jurors do pick their favourites, so there is the best of the festival kind of award, but the audience gets to do the same.

Well, because they do have big personalities! It's really funny because technically Wetlands is my favourite film of the festival, but I love Housebound as well. We sort of try and think "How do we want the film festival to kick off and what taste do we want to leave in our audience's mouth?" Bad choice of words for that film but (laughs)! Housebound because it is quite a fun film and it kicks off the energy right and Wetlands will leave you talking for a week. So we always think about what we want our audience to experience on our opening and closing night.

Now I just want to ask you a few questions about what films certain types of people should see. If someone liked to be scared and considers themselves a horror buff, what should they see?

If someone is easily grossed out, what shouldn't they see?

Well, there is a couple! Wetlands and The Immoral.

If someone wants a laugh, what should they see?

What should a music buff see?

If someone wants to see a feel good film, what should they see?

Nope, we don't have those! Oh...I Believe In Unicorns is not bad. I mean, it is still a little dark though. The other thing is My Name is Jonah, that is a bit of a feel good film.

If someone are after seeing a film which make them feel like they have taken some sort of wacky drug, what should they see?

Definitely the shorts, either the WTF Shorts or LSD Factory.

Well, we covered the shorts, but The Green Inferno is shocking in it's own way. I mean, cannibalism is always going to get a rise out of people. I think also a lot of people have a tendency to overlook Why Don't You Play In Hell?, and that is strangely quite a comedic but very gory film. In terms of documentary, because documentary is always more shocking to me than anything else as the truth is always stranger than fiction. Love Child, I was shocked when I saw that. But we have so many shocking films! 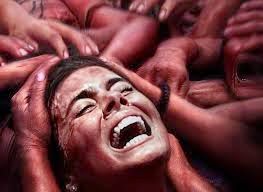 Yeah, I won't mention Housebound again, but I am a big fan of Trailer Park Boys. I've watched the series and I've watched the other two features. I do like quirky, so something like My Name is Jonah about this quirky guy who no one knows.

What part of the festival are you most looking forward to?

I always like the Closing Night because it's over and you can have a drink! But Opening and Closing Night is always what you look forward to because you can relax on Closing Night. It's not that you don't enjoy the rest of it, but you are on duty the whole time. It does take it's toll. Yet in the following weeks after you finish it there is this strange sense of loss. It's a bit like Stockholm Syndrome! Yet within a week after it we open up entries for the next year so then it begins again!

For more information and ticket purchases, please see the official Sydney Underground Film Festival website
Posted by NP1982 at 4:14 AM