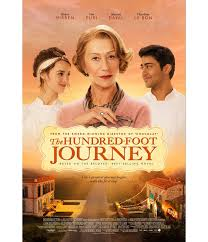 The Hundred-Foot Journey opens in Australian cinemas on the 14th August and is distributed by Buena Vista. Now showing in the USA and opening in the United Kingdom on the 8th September.

The Hundred-Foot Journey is a charming film filled with culinary delight and glorious landscapes. In retrospect, a film featuring such a sweet and inspirational journey should actually be a lot bigger than what it actually is. The film takes it's audience on a incredible journey which should provoke awe and admiration, yet it feels a little too much has been hurriedly crammed into it's two hour running time to really grasp the power and emotion that it should. There is no denying that it is indeed a nice film with many delicious visuals, but it is a film which knows it is charming and doesn't want to be too adventurous.

After the Kadam family have a series of unfortunate events happen to them, they make a fresh start in a small town in the French countryside. The head of the family, Papa (Om Puri) decides to open an Indian restaurant in an abandoned house, which just happens to be across the road from the town's Michelin star restaurant run by Madame Mallory (Helen Mirren). A battle between the two restaurants follows , but things change when a terrible act of cruelty is performed against the Kadams. However, the biggest change comes when Hassan Kadam (Manish Dayal) makes the hundred-foot journey across the road to work for Madame Mallory.

While The Hundred-Foot Journey is a fine film with particularly memorable and attractive visuals, it is also a film which had so much more to give. The Hundred-Foot Journey is, as the name suggests, a journey film. Journey films in general tend to have a lot to cover and as a result, if they need a longer than average running time in order to achieve this, it is forgiven. This film does indeed have a lot to cover and while it does cover all it needs to, it is done in an extremely rushed fashion. This is most evident in the second half of the film where everything is done as quickly as possible so it is able to fit into the two hour theatrical run time. There are many things which could have been fleshed out more in order to create real emotion rather than just be spoken of in one sentence and then moved on to the next thing. It was an opportunity to make a real emotional impact with the film that was sadly missed. The characters are likable and the story is sweet and inspirational, but it is just a shame that there is not enough feeling evoked to make it a great film. 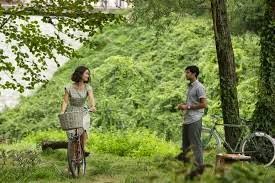 However, what The Hundred-Foot Journey lacks in depth and emotion it makes up for by what it does aesthetically. It is the food that is on show here and is absolutely glorious. There are a wide variety of edibles carefully displayed throughout the film in beautiful fashion and with these visuals, the viewer is also able to smell and even imagine exactly how everything would taste. This is turn does evoke hunger in the viewer. The shots of the French countryside and it's rivers, woodlands and small town are all exquisite, as are the night shots of the stars and fireworks in the sky. The Hundred-Foot Journey invests a great deal in it's musical score. A different piece of music is used for all the restaurants to symbolise the different atmosphere each venue holds. There is also music dubbed into the film when particular foods are on screen and when a character is trying an amazing meal for the first time to enhance the importance of this food, such as when Madame Mallory samples Hassan's omelette. However, there are moments such as these when the use of the music is a little too much. It does add a charm to the moment, but perhaps too much charm.

Helen Mirren is wonderful to watch in this film. Her character of Madame Mallory evidently has a number of layers (many which are unfortunately not explored in great detail) and does as much as possible with what has been given to her. Mirren is always thrilling to watching in a domineering role as she has the ability to be intimidating and frightening without even raising her voice, as she demonstrates when dismissing one of her staff. Manish Dayal is very likable in the lead as Hassan. However, he is the one who suffers the most from the rushed nature of the film, particularly in the last quarter. So much suddenly happens to him, but he is not given the chance to make all of this work for him and bring out the emotions of his changing situation. Charlotte Le Bon is also very good as Hassan's love interest, Marguerite. She is once again incredibly likable and works well with Dayal.

Coming away from The Hundred-Foot Journey you feel as though you have seen a great deal, but not felt a great deal. Just a pleasant way to spend two hours.