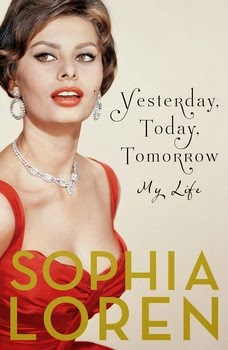 If you would like to purchase Yesterday, Today, Tomorrow: My Life

Despite being arguably the most successful and recognisable Italian film beauty of all time, screen legend Sophia Loren has always valued and maintained a high level of privacy, reserving stories of her past and inner thoughts only for those close to her. In Yesterday, Today, Tomorrow: My Life

, Loren opens up as never before and writes with complete honesty about the hardships of her childhood, her personal relationships and impressive career that has spanned over six decades. Her memoirs offer insight not just into the career of one of the true screen legends who was able to find success in both Europe and Hollywood, but also an incredibly strong and loyal woman who wins admirers with her story.

Sophia Loren's name is synonymous with all that is glamorous and sensual in the later years of the golden age of Hollywood and Italian cinema, but her life was not always one of

advantage. As she works her way through her treasure trove of memories, Loren writes of her childhood in war torn Naples where she and her family often went without food and spent their nights sleeping in a train tunnel to escape the threat of bombs through the night and of her escape from a life of disadvantage by moving to Rome and entering beauty pageants. At 17, she met Carlo Ponti, the man who would be instrumental in beginning her film career and become her husband of over forty years, but their union caused a tremendous amount of controversy before they were officially wed. Over her impressive career, Loren has starred in a wide variety of films showing her incredible versatility and received the Academy Award for Best Actress in a Leading Role in 1962 and an Honorary Academy Award in 1991. In Yesterday, Today, Tomorrow: My Life

, her memories are accompanied by the visual aid of photos and copies of letters from friends and family which she has kept in her collection of keepsakes over the years and gives the reader real insight into the life of Sophia Loren.

will be a thing of beauty for fans of Loren, but her words have the power to draw in more potential admirers who will no doubt find her story inspiring and her inner spirit tremendously likable and admirable. Loren's autobiography does what so many others fail to do and that is to make the reader understand who they truly are while telling their story. Loren has a particularly strong sense of self, which is something that she shares with a small number of people and to these people she is an extremely committed, loyal and loving friend. This comes across in her writing and her warmth and maternal instinct is felt in her words, something which makes reading Yesterday, Today, Tomorrow: My Life 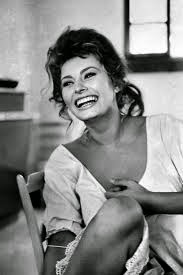 While Loren did indeed star in several Hollywood features in the 1950's and 60's, the majority of her body of work has been undertaken in Europe. Those who are familiar with and lovers of Italian cinema will relish in her vivid memories of working with Marcello Mastroianni and Vittorio De Sica and her insight into the special friendships she had with both. However, those who read Loren's book with the expectation of it being an old Hollywood memoir may be disappointed. Loren does write of her friendships with other Hollywood greats including Cary Grant (who was at one time in love with her) and Audrey Hepburn and her experiences working with Mervyn LeRoy, Frank Sinatra, Charles Chaplin and Marlon Brando, but more of the book is dedicated to her Italian films as it should be.

As Loren has never been particularly open about her private life, the book is an opportunity to understand the emotion behind her public persona. She writes openly of her strained relationship with her father, the hardships, her 30 day prison sentence for tax evasion in 1982 and her struggle to have a family. She also chooses to set the record straight about what was going through her mind when THAT photo of her and Jayne Mansfield was taken when she first came to Hollywood and expresses her dislike of being asked to autograph the infamous photo. Yesterday, Today, Tomorrow: My Life

is not a scandalous book by any means and does not reveal anything fans of hers would be shocked to discover, but it is a chance for the woman behind the legend to allow the public to understand the reasons and thoughts behind the main events in her life.

The book also has a slight comical edge to it, particularly when speaking of her beloved grandchildren who seem to be more impressed by the fact that their grandmother loaned her voice to Cars 2 than any other part of her career. It is a beautiful touch that instead of concluding the extensive photo section with a final shot of herself, she ends with her favourite portrait which is a drawing from one of her grandchildren entitled "Nonna". There is a generous offering of over 60 pages of photographs and all of which project the joy and amusement on set she has experienced over her career.

is a chance for all to fall in love with Sophia Loren the person, not just the screen beauty. Not a book of scandalous proportions, but rather one which makes one admire Loren for her attitude and her strength.