Tinker Bell and the Legend of the Neverbeast (2015) film review 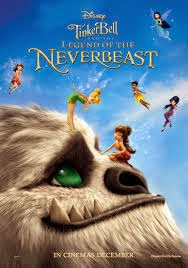 Disney's Tinker Bell movies are traditionally aimed at the younger female audience and Tinker Bell and the Legend of the Neverbeast is no exception to this rule. With as much simplicity as can be, the beloved fairy and her group of friends return for a film which will delight youngers and at the same time, confuse older audiences for an unforseen reason. In Pixie Hollow, things are as they have always been, which means that animal fairy, Fawn (voiced by Ginnifer Goodwin) is up to mischief by transporting animals to and from where they shouldn't be. After promising to behave, Fawn meets the fabled Neverbeast which she affectionately names Gruff and finds that her heart can't listen to her head. She soon finds out that the Neverbeast is part of a prophecy that will result in the destruction of her and her friends home, but Fawn cannot bring herself to believe that her new friend is the evil everyone is making him out to be.

Yet, it is still a film that little girls will love, especially those who have seen and enjoyed the five previous Tinker Bell films. Tinker Bell (voiced by Mae Whitman) and all her fairy friends return and they are accompanied by cute and fluffy animal friends. The story is extremely simplistic, but does come with special messages for it's targeted audience which are not to judge a book by it's cover and always follow your heart. They aren't hard messages to decipher which is perfect for young children. While Tinker Bell and the Legend of the Neverbeast serves as an easy film to take children to in the school holidays, it does feel as though it has a better place as a DVD than a cinematic release. It does not have the spectacle of a Disney feature film classic, but one feels that it would be more at home on the small screen than big.

Tinker Bell and the Legend of the Neverbeast is little more than a holiday movie for children, but it certainly serves it's purpose. It is a sweet film with good morals, but little more than that.