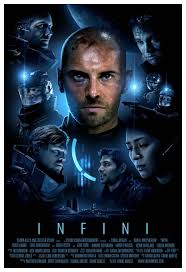 Infini is now available on demand in Australia and is distributed by Entertainment One. Now showing in cinemas in the United States.

Although Australian film has had much success on a national and international scale with such horror pieces of cinema as Wolf Creek and The Babadook, it is not known for yet conquering the sci-fi genre. Infini is a triumph for Australian cinema that will destroy this perception with it's shocking and intense combination of futuristic thriller and horror. Towards the end of the 23rd century, off-Earth travel has been achieved through the process of slipstreaming, which is a most controversial subject due to the danger involved and it's high fatality rate. Whit Carmichael (Daniel MacPherson) is stranded on a distant mining station after a freak accident involving the rest of his team and an elite rescue team sets out to rescue him. What awaits the team on this remote station is a lethal contagion where death is only the beginning of the horror.

Opening with complete chaos, Infini is intense and action-packed from it's very first moment. The combination of the sci-fi and horror film may not be a brand new one, but Shane Abbess' film puts a new spin on what the future beholds and what new nightmares may come our way. While paying homage to Alien in it's production and ever so slightly to 1998's Phantoms with it's horror element, Infini very much knows what it is and is a survival film rather than a narrative. Incredibly intense and not for the faint-hearted or queasy, the film is unpredictable and surprising. It can be rather shocking in it's screenplay and visually, but this is an enjoyable form of confrontation for anyone who enjoys either or both sci-fi and horror. 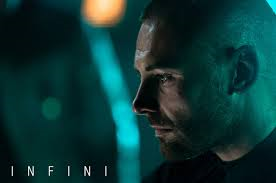 The method of rapid and non-continuous editing that the film employs can originally feel messy and often confusing, but as the film goes on one comes to understand why this decision was made as it adds to the final revelations. The production design of the world in the 23rd century and of the mining station are very well done. Sci-fi territory tends to come with the expectation of extravagant and impressive special effects. However, while Infini has minimal special effects compared to the big budget Hollywood genre films, it does not for one moment feel as though it is lacking. All CGI and special effects are used when they need to be and used well. The absence of more isn't felt throughout the film as one is so engrossed in the story that the suspense doesn't allow you time to think otherwise and when there is the time it is something to embrace.

Daniel MacPherson gives an exceptional performance as Whit Carmichael. He is the perfect leading man for the film with his strong presence and sense of confidence that he projects on screen. Yet, his character is still very much relatable and very human as he swings between the emotions one would when they are made fully aware that survival is not guaranteed. Grace Huang is also a stand out and Luke Hemsworth, Dwaine Stevenson and Harry Pavlidis can all be rather terrifying.

Infini is a fine achievement in Australian cinema, but it is a fine film in it's own right with it's intensity and clever production.