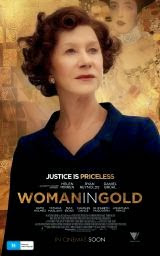 Woman in Gold is a biographical film that does a fine job of telling the story of Maria Altmann and her family, but it's dramatization struggles to remain immune from the curse of cliché. Based on the ground-breaking case of the Republic of Austria v. Altmann, Woman in Gold is the tale of Austrian born Maria Altmann (Helen Mirren) who's family were the owners of the incredible painting by Gustav Klimt of her aunt, Adele (Antje Traue) entitled "Portrait of Adele Bloch-Bauer" until their home was invaded by Nazis who took possession of the everything including the painting. Now living in Los Angeles in the 1990's, Maria seeks the assistance of young lawyer, Randol Schoenberg (Ryan Reynolds) to help her seek justice for having her family's property stolen. Her journey takes her back to the country she vowed never to return to and to face the past she wanted to forget.

Maria Altmann's life story is told wonderfully on screen. From her life of hardships in war torn Vienna to her later years fighting for justice in the United States, her fight for her life and then for justice is well documented and very thorough. Altmann's earlier years in Vienna (as portrayed by Tatiana Maslany) are particularly well done, as great suspense is generated with her and her husband's (Max Irons) quest to leave the Nazi dominated city and her inevitable separation from her family is extremely emotional. However, the scenes set in the 1990's struggle for the same type of suspense. While the real life proceedings in the case were undoubtedly eventful and extremely important, it's dramatization in the film is somewhat cliché and feels almost overdone. There are several features of the film which were changed from the reality for dramatic effect (such as Randol working without pay for years), but these changes come across as extremely cliché due to the heroism that is attempted to be attached to the characters and their situations.

However, what is done well in the scenes set in Maria's later life are the internal struggles that she experiences in deciding whether to go ahead with her case. The portrait in question which is now on display in New York City's Neue Galerie, was much loved by the Austrian people when it was hung in their country. This is one of the ethical dilemmas that Maria is faced with in the film as she does not want to take something away that is so important to her homeland, yet she believes that justice must be served. The other dilemma she is faced with is whether she should just let the past be the past or if she should seek to reclaim something that belonged to her family half a century earlier. It is indeed a painful thing for her to revisit the past and to once again see the place she left because of the horrors that were occurring there. Maria's journey is an emotional one for her as it means going back to a place she vowed never to return to. She is also faced with the pressure of outsiders making their opinion that she should just let it all go very vocal. Yet her belief in doing what is right by her family who are now gone, but always a part of her is very admirable. Woman in Gold is beautifully shot with some incredibly lovely images. The beauty of the city of Vienna is well captured on camera with glorious shots of it's sights including the Hofburg Palace. The Vienna occupied by Nazis and the Vienna Maria returns to have two completely different atmospheres. Of course this is created by the oppression felt by the Nazis which is not there upon returning, but the cinematography allows for the feeling of a dark cloud constantly following the characters during the war. The soundtrack by Hans Zimmer and Martin Phipps is absolutely exquisite.

Helen Mirren does a very good job in the lead as Maria Altmann. She gives a solid performance as a woman who is exhausted from her years of guilt over leaving her family and bitterness towards her home country. The one problematic thing about Mirren's Maria is that her past between when she first arrives in America and when she looks for a lawyer is a mystery. There is no word of when her husband died or whether they had any children (which she did indeed as she had three sons and one daughter). Ryan Reynolds also gives a very good performance and shows a great deal of emotion especially when he acknowledges his own Austrian heritage. Tatiana Maslany doe exceptionally well as the younger Maria and the pairing of her and Max Irons works extremely well.

Extremely well made and a fine tribute to both Maria Altmann and other families who suffered the hardships her and her family once did, Woman in Gold is entertaining but would be taken more seriously if it did not try to overdramatize itself. The story itself is incredible enough without inserting Hollywood clichés into it.