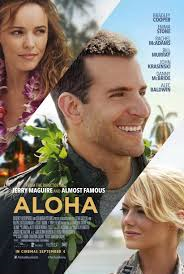 Year: 2015
Running Time: 105 minutes
Director/ Writer: Cameron Crowe
Cast: Bradley Cooper, Emma Stone, Rachel McAdams, John Krasinski, Danny McBride, Bill Murray, Alec Baldwin, Jaeden Lieberher, Danielle Rose Russell, Bill Camp
Director Cameron Crowe made his latest film Aloha as a love letter to Hawaii and it is just that. A love letter to a beautiful part of the world which silently tells his audience that he was just desperate to make a film there and it didn't matter what sort of film. Aloha is a fine example of how trying too hard and not enough is possible in one film. Military man, Brian Gilcrest (Bradley Cooper) returns to Hawaii after more than a decade away and reconnect almost immediately with his now married ex-girlfriend, Tracy (Rachel McAdams) who he stood up in a most cold way. He is teamed up with Hawaiian born, Allison Ng (Emma Stone) who opens up Brian to a world he had neglected and helps him find happiness. He finds that old ghosts catch up with him quickly here and old acquaintances are not easy to forget.
﻿
Aloha is a wonderful travel advertisement for Hawaii. Cameron Crowe's love for the 50th state comes across loud and clear in this film so much that it feels as though everything else besides the visual representation is done at a mediocre level. The story is incredibly predictable and although there are some elements of originality in there, there is too much going on to pay attention and appreciate the creativity of one storyline when several unoriginal ones are also taking place at the same time. Likewise, it is hard to feel any connection and emotion in any of the film's sub-plots as they are all happening simultaneously and with little time and effort put into each one. This isn't helped by the characters being badly written so that no one can sympathize with them as they never truly feel as if they know them. 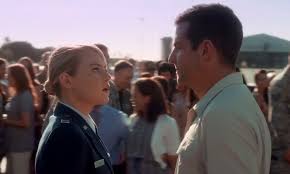 Everything in Aloha points to the explanation that Crowe was just desperate to make a film in Hawaii and that means any film. It feels as though he was so set on writing a film that is set in Hawaii that he only half developed everything else, including the depth of the characters and screenplay. Visually the film is very pretty, which is a feature that many will find attractive and be drawn to the film because of. It is rather atmospheric, but only in relation to the way white people are living there. The way the natives live on Oahu is not represented in a favourable light when it is seen in the film, which is seldom and although Crowe tries to work them into the film it does not seem like nearly enough.
Bradley Cooper has had a stellar run of film roles in recent years thanks to the wonderful scripts that have come his way. It will come as no surprise that Brian Gilcrest in Aloha is not one of these roles. Cooper does all he can, but Brian is such a badly written character who at the end of the day really has no idea who is so how is the audience expected to understand him or connect with him? He swings from being arrogant and obnoxious to being goofy and playful with no warning and although his background he should indicate a significant amount of depth, it is hard to take him seriously. Yet, the final scene is such a fine piece of work by Cooper and is his redemption.
Perhaps the biggest talking point of Aloha is the casting of Emma Stone as Allison Ng, the quarter Hawaiian and quarter Chinese love interest of Brian. Stone is a fine actress and has the quirky, but relatable personality which is highly marketable and cherished in Hollywood at this point in time. One cannot blame a film maker for wanting her to be in their film, but was Crowe craving her so much that he had to place her in a role that clearly wasn't meant for her? Performance-wise Stone does cross the line into the territory of over-exaggeration in an attempt to maintain her quirky comedic style so many have come to love. However, even if she was spot on it is incredibly hard to take her seriously when she talks of her heritage and her passion for the land and their customs because of her physical appearance.
The stand out among the performances is that of John Krasinski who plays Tracy's husband, Woody. The surprising thing is that Krasinski says only a handful of words throughout the whole film, but he is truly hilarious and proves that actions speak louder than words.
It is hard to decipher whether Aloha has the potential to be a better film than what it is. Cameron Crowe certainly has the ability to be a better film maker and the impressive cast have given much better performances in the past. Overall it is a mere disappointment, but the last ten minutes is a gem. It is just a shame you have to wait so long for it.
2.5/10
﻿