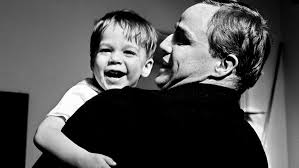 Listen to Me Marlon screened at the 2015 Sydney Film Festival on June 6 and 8.

Although he was larger than life on the screen and hailed by many as the greatest film actor of all time, Marlon Brando was an extremely private figure in life and an enigma even to those who knew him. With the finding of several of Brando's personal audio recordings, his true character has finally been realised as these recordings are the basis for Stevan Riley's Listen to Me Marlon. Brando narrates his own life story with a great deal of honesty and unrestrained emotion, something which was uncharacteristic of the man in his lifetime. His audio recordings cover his early life in Nebraska to his days under the guidance of Stella Adler to his days in Hollywood. While archival news footage tells the story of his most painful ordeal, which was having his eldest son, Christian shoot his younger beloved daughter, Cheyenne's boyfriend dead in his own home.

Although there have been several "tell all" biographies and documentaries made about the legendary actor in the past, Listen to Me Marlon provides it's viewers with an absolute understanding of Marlon Brando. Although he is widely regarded as one of the greatest film actors of all time, Brando's reputation of being difficult to work with and cynical towards Hollywood and it's culture was also very well known. Listen to Me Marlon is ultimately Brando telling his own story thanks to the recently found audio recordings and is a greater insight into his mind and world than his autobiography, "Songs My Mother Taught Me", which was published in 1995. Throughout the film, one comes to understand that the actor was not disruptive and argumentative because it fit his reputation of being a rebel or that he was a troubled soul that felt the need to lash out at unsuspecting victims. Brando was a troubled soul for his own reasons, but this wasn't the reason for his behaviour. It was his belief in the realism of acting through his Method training and desire to grasp the most real moments in life that led to him not being at peace with the Hollywood system he as in and it's sense of distorted reality. Even nearly eleven years after his death, Listen to Me Marlon provides revelations of Brando's personality and private life and the beautiful thing is that this isn't given second hand, it is delivered by Brando himself as though he had risen from the grave.

As well as being blessed with Brando's himself telling his story as though he was with us once again, his voice is accompanied by a computer generated image of his face. Brando will tell you in the film that this was achieved by being photographed with every expression and facial angle possible while he was alive. The result is somewhat spooky, but also utterly mesmerising. One cannot tear their eyes away from the distorted, but still recognisable images of Brando as though he was once again in life. Although directed and written by Stevan Riley,  Listen to Me Marlon is completely Brando's film. It contains no direct interviews with those who knew him or experts of his work, only his voice and his images as well as archival footage of interviews and film footage. The extensive variety of photographs from Brando's life and many of them before unseen is extraordinary.

Listen to Me Marlon shows the great actor in a light which has never been seen before and gives a much greater understanding to a man who was so private in life. In death he opens up with an incredible amount of honesty and creates a greater admiration by showing what a sensitive and honest man he was who just wanted to live a true and free life. Listen to Me Marlon is a wonderful piece of cinema and an absolute privilege.