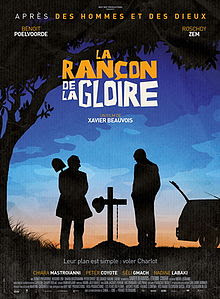 Based on real life events, The Price of Fame takes an occurrence that was perhaps not so humorous at the time, but dresses it up to so that once can empathize with the bad guys and laugh at their misfortunes. When Eddy (Benoit Poelvoorde) is released from prison in Switzerland, he is taken in by his long time friend who is greatly indebted to him, Osmen (Roschdy Zem) and his daughter, Samira (Seli Gmach). Osmen has fallen on hard times himself with his wife, Noor (Nadine Labaki) in hospital and he is unable to afford a major operation which she greatly needs. Eddy comes up with an idea that will solve all of his and Osmen's financial problems, which is that they should steal the freshly buried corpse of the great comedian Charlie Chaplin and hold it for ransom. However, the Chaplin's are not so easy to cooperate with criminals and their scheme does not go to plan at all.

The Price of Fame has taken the 1978 event of Charlie Chaplin's corpse being stolen from the cemetery in Vevey and tweaked the details so that it is able to call itself a comedy. The film humanizes the two men who masterminded the theft and attempts to rationalize their decisions and create empathy as a result. It is almost a look behind the scenes that can be adapted to any theft and allows people to understand their actions as despicable as they may seem from the outside. Although it does dub itself a comedy and there are indeed laughs to be had throughout the film, they are not greatly original laughs nor are they big, hearty, memorable laughs. The Price of Fame has a rather light and flimsy atmosphere, but has moments when one can tell it is trying to be much more with the help of loud instrumental, uplifting music. However, one cannot help but marvel at the beauty of Vevey which is captured beautifully on film.

Despite it's attempts to remain respectful to the great man, Chaplin fans will still feel rather conflicted by The Price of Fame. Grave robberies may well have comical elements when searched for and the grave robbery of a great comical figure such as Charlie Chaplin may make this combination sound appealing for a film maker. However, Chaplin still remains a much loved figure to many around the world and watching the force that Eddy and Osman use to move the coffin when you can hear body moving around inside will be rather upsetting for fans of Chaplin, despite knowing that this is just a re-enactment. Many will argue with his point that when someone has passed away, a body is just a body and that worrying about his physical body shouldn't be an issue. Yet can one ever see the body of one they love as just a body? However, The Price of Fame does truly attempt to honour Chaplin in the best possible way by showing clips of some of his best work and speak of him in a loving way by acknowledging his tremendous success and talking bout his work with the underprivileged. His son, Eugene Chaplin and granddaughter, Dolores Chaplin are also featured in the film and there are references to Chaplin and his life that are slipped in such as Eddy finding his work in a job not unlike where Chaplin begun.

Benoit Poelvoorde and Roschdy Zem both do well in their roles and give very different performances to each other. Poelvoorde is the more comedic one of the two while Zem is the more dramatic. However the stand out performance wise is Seli Gmach, who plays Osman's daughter, Samira. She plays the role of a girl who has been forced to grow up quickly under the circumstances and be the woman of the house, but is still a little girl who needs both her mother and father around very much. She has the strong ability to be both heartbreaking and extremely witty at the same time.

The Price of Fame is fine, but doesn't do anything which is astonishing or brilliant. It will be a hard watch at times for Chaplin fans, but if his family can feel that it is respectful enough for them to take part then his fans should attempt to feel the same. 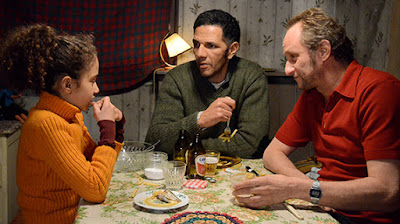