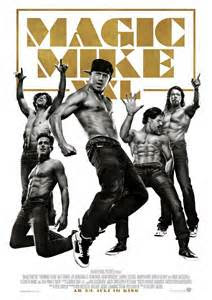 Year: 2015
Running Time: 115 minutes
Director: Gregory Jacobs
Writers: Reid Carolin
Cast: Channing Tatum, Joe Manganiello, Matt Bomer, Kevin Nash, Adam Rodrguez, Amber Heard, Jada Pinkett Smith, Donald Glover, Andie MacDowell, Stephen Boss, Michael Strahan﻿, Elizabeth Banks
Magic Mike XXL is now showing in cinemas everywhere and is distributed in Australia by Roadshow Films.
Magic Mike XXL bears little more than sibling resemblance to it's 2012 older brother with it's goofy, comical demeanour, but within it's heart lies something that is rather rare in such a film which makes it a delight. Three years after Mike (Channing Tatum) left behind his career as a male entertainer for a simpler and more domestic livelihood, he makes the decision to reconnect with his old friends, the Kings of Tampa and the group travel together to a stripper convention in Myrtle Beach. The trip brings confrontations, laughs, accidents and of course, girls who distract the boys along the way. Mike finds that he is really searching for happiness and peace in his life, and when he meets up with Zoe (Amber Heard), he recognizes that he has the chance to make someone else as well as himself happy simultaneously.
On the surface, Magic Mike XXL is funny, light entertainment which can be hard to take seriously due to the glaring obvious fact that male entertainers such as the ones in the film are more than capable of provoking hysterical fits of female laughter and squeals during their routines. Some dialogue and actions even seem quite forced and the screenplay, although entertaining with some hilarious scenes (particularly the soon to become infamous service station scene), has no sense of strong conflict and a particularly weak finale.
However, the film possesses a very special quality. The second Magic Mike is a film that is entirely respectful to both men and women and sheds light on why male entertainers do what they do. It isn't just for the money, it is because they have the opportunity to make women happy and make them feel good about themselves, which is a beautiful thing. In the film, the characters enjoy what they do because they love seeing women smile and taking a girl who is down on herself and giving her confidence. Of course this isn't saying that every guy should perform a strip routine for their girl to make them feel good about themselves, but in a relationship each others happiness must be the priority and why they want to be with that person. The whole film is based on finding a place of happiness for the one you are with and within yourselves and although the ending may seem inconclusive, it is the perfect ending for a film with such a basis. 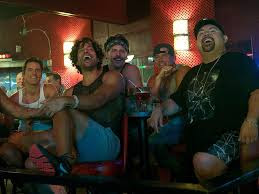 Magic Mike XXL is a fairly unique film in that the five-man dance squad can only be described as one big bromance. The five members of the team are all best friends and clearly adore each other, but also fight and make up like they are in a relationship themselves. If these men had different occupations besides being male strippers, the film would be categorized as a guy's film. Yet, the target audience for Magic Mike XXL is the female demographic as they flock to see good looking men take their clothes off on the screen. Men shouldn't be put off the film for this fact, as at it's heart it is a film about men who love women regardless of what they do for a living.
There is no denying that the second Magic Mike film attempts to replicate the first film in terms of cinematography, especially considering the director of photography is none other than Steven Soderbergh who directed the first film and was also the first film's director of photographer (under his pseudonym of Peter Andrews). There are some very interesting uses of lighting throughout the film and creative lingering camera angles, but one cannot decide whether they actually enhance the film or just feel out of place. The overall feeling of the film is that of a light hearted, but sentimental comedy and the inclusion of classy filming techniques can be confusing as it feels like a contradiction. Of course, the soundtrack is a lot of fun, and the dance routines are well choreographed, if not ridiculously cheesy at times. The film can be very loud during these routines as it is not just the music accompanying the dance moves, it is also more often than not loud female cheering and squealing as well. In such situations, it is practically a necessity to have this background noise..although this is very loud background noise.
Channing Tatum does well recreating his role of Mike and is still as charismatic and likable as ever. He has the most natural dancing talent out of the main characters and director, Gregory Jacobs rewards him with the most on-camera dancing time. Joe Manganiello also does well and shows he has terrific comedic timing. Andie MacDowell doesn't have much time on screen, but also shows her great comedic ability with the time she has.
Magic Mike XXL is in many ways what you would expect it to be with it's simplicity and entertaining dance numbers, which is ultimately a lot of fun. However, it also stuns with it's sentimentality and heart and is a film based on happiness, which is a truly unique thing in such a film.
6.5/10