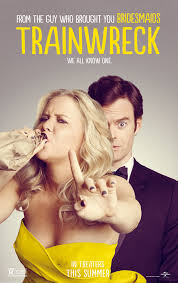 Trainwreck is unapologetically funny with it's witty and uncompromising screenplay brought to life by a superb cast driven by Amy Schumer, but it also surprises with it's depth of human relationships. Amy (Schumer) is living the life, or so she believes. She has a great job at S'nuff magazine where she is up for a promotion and has a different love of her life every night who she says goodbye to before they are able to wake up the next morning with her. When she meets Dr. Aaron Conners (Bill Hader) on a work assignment, she is perplexed to discover that she may have met her match...the thing that she was brought up to believe was only going to lead to unhappiness and being trapped for the rest of her life.

Trainwreck breathes new life into the romantic-comedy and breaks through the stereotype of this being a female audience dominated genre. The wonderfully witty script (also written by Amy Schumer) celebrates the world as a place where not everyone wants the same things out of life and love while at the same time seeing the comical value in the differences. Although the screenplay is not entirely airtight, it is forgiven due to it's comedic value as the laughs come at a rapid pace in every scene with no lapses in humour including in the more serious scenes. While there are many a sexual joke, there is also much well-timed general and situational humour that doesn't rely on tired and uncreative methods to get one laughing.

However, despite Trainwreck containing many a crude sex joke which may not be to everyone's taste, the film also has a great deal of heart and says a great deal about the dynamics of family. Amy and Kim (played by Brie Larson) are almost polar opposites as sisters which comes down to the fact that their parents were seemingly complete opposites and while Amy idolised her father (Colin Quinn), Kim idolised her mother. The two take after the parent they worshipped and in Amy's case this includes the worst parts of her father. From the first scene we see this where Amy listens to her father's views on marriage and we then see her living up to this view herself in her 30's. She is even aware of what these negatives are and hates these aspects of him, but without even realising it replicates his bluntness, negativity and addictive nature, particularly to vices such as alcohol and sex. It would seem that Gordon is the original trainwreck with his adoring daughter mimicking his behaviour, which can often happen in children. 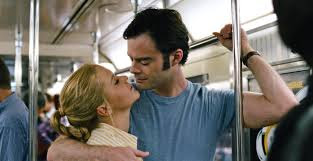 Amy Schumer may well be the fastest rising star in comedy this year and Trainwreck gives one a valid understanding of why. Not only is her script hilarious, but she shines on the screen in a performance that is natural and heartfelt. When she is hilarious she is hysterical and when she is emotional she is heartbreaking. She is the perfect comedic leading lady for the present and regardless of the fact that the role was written by her for her, she is believable and has an effortless sense of comedic timing. While her Amy may not always be completely likable due to her self-destructive nature, she is still a character one loves to watch.

Schumer is surrounded by a superb supporting cast who raise plenty of laughs themselves. Bill Hader is completely endearing and immediately likable as Aaron. His dead pan sense of humour works so well in Trainwreck as it makes his delivery of humorous dialogue unexpected and catches one by surprise. His on-screen chemistry with LeBron James, who plays himself is superb and also hilarious. Brie Larson almost sneaks under the radar as Kim, but still gives a solid performance and Tilda Swinton is almost unrecognisable as Amy's difficult boss, Dianna, but shows that her wonderful acting ability also extends into comedy. Watch out also for a hilarious cameo by Leslie Jones and cinema veteran Norman Lloyd.

Trainwreck has a fantastic awareness of self and may well be the best comedy released in 2015 so far. Amy Schumer is the leading lady which cinema-goers have been yearning for and here she proves why she is fast becoming a household name.