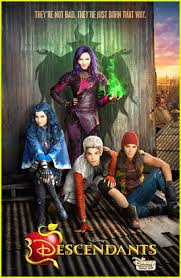 Original Disney Channel films tend to slip under the radar when one is not a hard core Disney fan these days. The last original Disney Channel film to break past this barrier was High School Musical back in 2006, which launched Zac Efron, Vanessa Hudgens and Ashley Tisdale into instant stardom. Descendants is the latest offering by the television division of the mouse empire which has drawn an incredible amount of excitement from Disney fanatics and interest from the outside as one and the reason for this is because it is Disney doing what Disney does well, which is making films reminiscent of their own work.  The result is something which is a whole lot of fun and shouldn't be taken too seriously, but will undoubtedly be enjoyed more by those who understand the Disney Channel's code of conduct.

When Happily Ever After took place in our beloved fairy tales, the villains of the stories were exiled to the Isle of the Lost to dwell for the rest of their lives with no escape for them or their families. Many years later when the son of Belle (Keegan Connor Tracy) and her Beast turned handsome prince (Dan Payne), Ben (Mitchell Hope) expresses his wish for the children of the Isle of the Lost to attend the same school as he and fellow fairy tale heroes' children in Auradon. Chosen for this task are Cruella De Vil's (Wendy Raquel Robinson) son, Carlos (Cameron Boyce), the Evil Queen's (Kathy Najimy) daughter, Evie (Sofia Carson), Jafar's (Maz Jobrani) son, Jay (Booboo Stewart) and Maleficent's (Kristin Chenoworth) daughter, Mal (Dove Cameron). Waves of tension rip through the school upon their arrival and the four struggle to fit in and what makes it even harder for them to do so is the fact that they really have no idea who they are without their parents.

When it comes to Disney and the Disney Channel, one cannot pretend they don't know what they are going to get. The Disney Channel in particular is all about a squeaky clean image with an uplifting message, lots of smiles and the odd (or frequent) song and dance number. To be disappointed with Descendants is to go into it thinking it is going to be anything else other than these things. Disney is very good at drawing on their past projects to pave way for a new film and here they build on the concept of society being obsessed with the children of celebrities. Of course, the celebrities in question here are the past Disney villains. What results is a film that is a lot of fun for the whole family with it's colourful characters and simple, but effective laughs. 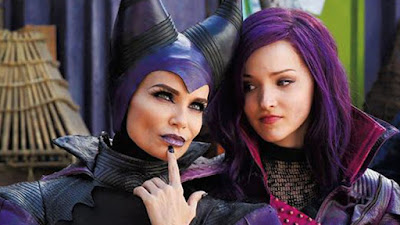 Descendants is absolutely reminiscent of High School Musical with it's catchy tunes, cheesiness and the girl and boy from different worlds and it will come as no surprise to anyone that director, Kenny Ortega also directed all three of the High School Musical films. Again, the film is a Disney lover's paradise with plenty of references to their past films, including Mulan's daughter's Lonnie (Dianne Doan), the Fairy Godmother (Melanie Paxson) reciting "Bippity boppity boo" and Cruella De Vil's son, Carlos being brought up to believe that dogs are terrible creatures. However, much of the film is very over the top and predictable, but all expected considering the ethics and pattern of such Disney Channel productions. These aspects are not so much negatives in this respect, merely observations. Of course, there will still be audiences who have made the switch over to see Descendants and criticise it for being so, but original Disney Channel movies are to appeal to families and rely on what has worked for them for many, many years. The costume design by Kara Saun is superb as is the production design by Mark Hofeling.

Character is the main drawcard for Descendants and the casting of these characters is absolutely everything. Dove Cameron, who at the tender age of nineteen is no stranger to being a leading lady (she plays both of the lead roles in the Disney Channel series, "Liv and Maddie"), is undoubtedly the main character as Mal and has the most well developed character out of the children. Her inner struggle between good and evil and the constant need to impress her mother makes her an interesting character and Cameron portrays her wonderfully by being not quite evil but walking the tightrope between the two constantly. Cameron Boyce, Booboo Stewart and Sofia Carson all also give solid performances.

The absolute scene stealers are Kristin Chenoworth and Kathy Najimy. The two provide a comical side to the traditionally brutally evil villains, but it is a change that works and delights in the film. Chenoworth in particular has an incredible amount of presence as Maleficent and her song "Evil Like Me" is the best solo song in the film. Najimy is hilarious as the Evil Queen with brilliant one-liners and her and Chenoworth have superb on-screen chemistry as the two villains compete, but also laugh together like old friends.

If you let it be and accept it for what it is, Descendants is a great deal of fun in a clean and cheesy, but undeniably sweet way. Disney lovers will love it and anybody who switches over to the Disney Channel to have some fun should just go with it and enjoy it.