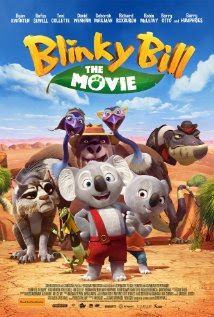 Blinky Bill the Movie is now showing in Australian cinemas and is distributed by Studiocanal.

Blinky Bill the Movie follows the trend we are currently seeing with children's stories being adapted to film. The excitement the cuddly, mischievous koala will create by once again being on the big screen will be infectious with those who grew up reading the "Blinky Bill" books by Dorothy Wall which were first published in the 1930's and watching the animated television series in the early 1990's. However, it is these loyal fans who will feel the greatest blow by Blinky Bill the Movie. The newest tale of Blinky Bill and his friends is aimed wholly at the younger generation, which is wonderful for introducing them to this Australian animated icon. Yet it is a let down for those who have grown up with him and are seeking to embrace his return to the screen.

In this updated version of Blinky Bill, our cute and cuddly hero (voiced by Ryan Kwanten) is the naughtiest little koala in his home of Green Patch in the Australian bush. His father, the great adventurer Bill Koala (Richard Roxburgh) was last seen embarking on a trip into the Outback and has not been seen for months and is assumed to be dead by everyone, except Blinky. Against his mother's wishes, he sets out to find his beloved father and bring him home. He soon finds that the Outback is an unforgiving place and that there are those out there who are not friends of koalas, including feral cat (Rufus Sewell) has a score to settle with koalas and will stop at nothing to take his revenge.

Visually, Blinky Bill the Movie is a solid animation effort. The character of Blinky Bill as we know him has been given a makeover and thanks to the advancements of CGI, his world is a great deal more colourful than what is has been in the past. Blinky himself is still a cute little critter in this new form of animation, though perhaps not as endearing as he once was. 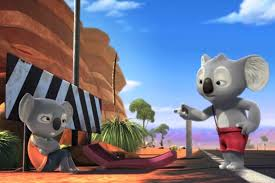 Blinky Bill the Movie leaves a lot to be desired for it's older audience, though it will still prove to be a hit with the younger audiences this school holidays. The story is very basic without a great deal of emotion and promotes the popular concepts that appear in family films of belief in oneself and the importance of family. Blinky Bill the Movie is a prologue film of sorts as it introduces Blinky for the first time and explains how he came to be an adventurer and meet his friends, including the character of Nutsy who is featured in earlier "Blinky Bill" works. This concept of a prologue film is another trend in children's films at the present time and while it may give an original telling of the concept, it can still not be an original story on a grand scale.

Like the story itself, the dialogue and humour is exceptionally basic. Even though the script tries harder to give the little ones laughs, there are still some moments which will delight older viewers. The character of Jacko, the wacky lizard voiced by David Wenham has some comical moments, as does Wombo the wombat (voiced by Barry Humphries), who seems to have had a little too much sun. Many adults will find that the highlight of the film occurs in the opening scene where a game of bush cricket is taking place and Billy Birmingham of The 12th Man fame makes a hilarious voice cameo. Blinky Bill the Movie is very much a proud Australian film and many of the jokes and references will be lost on those who are not living in or have lived in Australia, including the ones made during this game of bush cricket, which will also be lost on anyone who isn't a cricket fan.

There is no denying that Blinky Bill the Movie is an easy school holiday movie that the younger ones will enjoy for it's simplicity and talking animals. However, despite a few humorous moments, the loyal Blinky Bill fans who have stuck by him for decades will be disappointed at the lack of substance and respect they are given in the film.