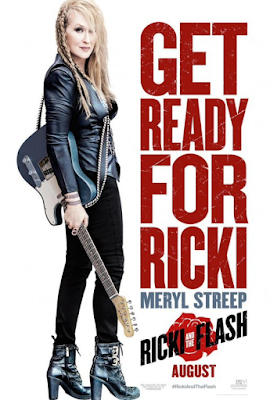 Apart from the ever strong presence of Meryl Streep and an enjoyable, enthusiastic soundtrack, Ricki and the Flash fails to leave a lasting impression as a result of it's uneventful and exceptionally light screenplay. Middle-aged rock chick, Ricki (Meryl Streep) seemingly lives an uninspired life where she is unfulfilled by her ill-paying supermarket day job and playing with her band The Flash as the house band at the bar, The Salt Well in Los Angeles. Her world is shaken up and the guilt of the past comes back to haunt her when she receives a call from her ex-husband, Pete (Kevin Kline) telling her that her daughter, Julie (Mamie Gummer) has just been left by her husband and is in a bad way. Ricki travels back to Indiana to face the wrath of her three children for leaving them years ago to pursue her dream of becoming a rock star.

Ricki and the Flash is a somewhat disappointing screenwriting effort for Diablo Cody. The screenplay comes with a message that Streep's Ricki verbalises during the film which is that women have to choose between being a mother and following their dreams and will often get condemned for choosing career while men are applauded for it. The example of Ricki in this film is an exaggerated one, but the essence of it is a provocative message which is a topic that is discussed more and more often in today's society. Yet, the script that exists around this notion is rather lifeless and cannot decide whether it is supposed to be dramatic or comedic, which results in the film as a whole being rather light and soft. The overall feeling Ricki and the Flash leaves one with by the end of the film is not that of closure, but a sense of how unrealistic the atonement presented is. However, the film can be commended for avoiding certain stereotypes often presented in reconciliation films and the usual plot points that are included which is rather refreshing.

Yet one of the factors that does save the film is the true object of Ricki's affection (not her on screen boyfriend Greg played by singer Rick Springfield), her music. The soundtrack contains both current and classic songs which are refashioned in the style of Ricki and her band. Despite how anticlimactic story-wise the film turns out to be, the finale is at least a lot of fun thanks to Ricki's music.

The other saving factor of Ricki and the Flash is Meryl Streep, who can make any film seem a greater success thanks to her presence. Streep slips into the persona of Ricki easily and makes one feel empathy towards the character regardless of how questionable some of her decisions are and quirky her behaviour is. Like the chameleon she is, she also has no problem pulling off a believable rock chick persona and appearance. Starring opposite Streep is her real life daughter, Mamie Gummer who shows tremendous talent and potential. She does not back down from her role as the emotionally unstable Julie and in some scenes even outshines her mother. Rick Springfield gives a solid performance and is also rather likable.

Even though Ricki and the Flash attempts to carry a message which is relevant and beneficial, the film itself remains rather unmemorable and even the force of Meryl Streep cannot redeem it's lack of impact.