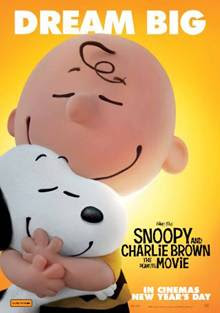 Snoopy and Charlie Brown: The Peanuts Movie is now showing in Australian cinemas and is distributed by 20th Century Fox.

Snoopy and Charlie Brown: The Peanuts Movie is a charming and nostalgic slice of cinema which will delight all fans of the original and their families. Young Charlie Brown (voiced by Noah Schnapp) is well loved and affectionately teased by his friends and peers in all his awkwardness and clumsiness, but he is so hard on himself that he cannot see this and believes he is loved only by his trusted canine companion and sidekick, Snoopy. When his class welcomes new student, the Little Red-Haired Girl (Francesca Capaldi), Charlie Brown falls head over heels for her and sets out to impress her in any way he can. Of course, he ends up feeling completely intimidated by her and as far as he is concerned, he only further proves his inadequacy.

The Peanuts Movie is first and foremost a children's film, but it is one to be enjoyed by the whole family for it's nostalgic value. For the majority of children, The Peanuts Movie will be their introduction to the characters first made popular by creator, Charles Schulz in comic strip form in 1952. However, their parents and grandparents would have grown up with the lovable Peanuts characters in print and television form and as a result the simplistic story and themes are accepted with gratitude as it is reminiscent of their childhood. However, it is not a clean cut children's film as there are some references which will go over the heads of younger audience members such as the Leo Tolstoy "War and Peace" references and some scenes can be a little tedious for young viewers. The film is slowed down by the breaks in Charlie Brown's story for Snoopy's daydreams and stories, but this pays homage to past Peanuts television episodes and specials and the film is ultimately about the two of them. 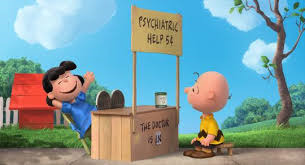 Even though the story may be simplistic, the themes in The Peanuts Movie are wonderful for the younger audiences as they are beneficial to their understanding of the characters and how there is a bit of Charlie Brown in everyone. Charlie Brown has long been known as everyone's favourite underdog and as they say, everyone loves an underdog. What is so relatable about Charlie Brown in this film is that, like many of us, he is so hard on himself and wishes he was something more than what he is. He feels inadequate and like he is not any match for his beloved Little Red-Haired Girl, so he thinks he needs to change himself to prove that he is good enough for her. Yet, this leads to him making a greater fool of himself and further clumsy disasters. The lesson here is a very simple one and that is to be yourself and people will like you more for who you are than for who you are trying to be. Trying so hard to be someone you are not will inevitably lead to disaster. There are some beautiful quotes by Charlie Brown spoken in the film that are useful for when one is feeling low on themselves, particularly children who are growing up and feeling awkward.

Although the animation used in The Peanuts Film may seem very simple as opposed to some of the other animated films currently in the cinema, it is deceivingly so. The visuals give the impression that they are of the hand drawn quality which the original Peanuts were and this is charmingly reminiscent of it's past. Yet, when looked close at features such as Lucy's hair and the landscapes, the use of computer generated imagery is evident. The ability to give the impression of hand drawn simplicity is a loving tribute to it's past, but the CGI is almost sneakily inserted to greater enhance the world in which the Peanuts characters exist. There is a beautiful use of colour that comes along with this unique animation.

Snoopy and Charlie Brown: The Peanuts Movie is a beautiful tribute to a past animation form that is still appreciated and loved even now. The Peanuts characters meant so much to past generations when growing up and this film allows their descendants to understand why and enjoy as much now as in the past.