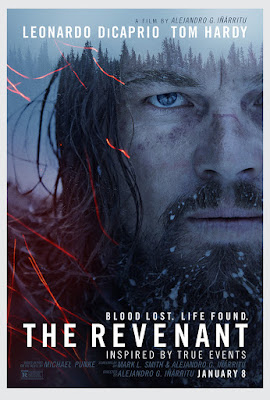 The Revenant opens in Australian cinemas on January 7 2016 and is distributed by 20th Century Fox. Released in the United States January 8 and the United Kingdom January 15.

Alejandro Gonzalez Inarritu's The Revenant is the perfect hybrid of exquisite beauty and graphic brutality in it's story of human survival in the unforgiving wilderness which is enhanced by it's superb performances by it's stellar cast.

Inspired by true events and based in part on the book of the same name by Michael Punke, The Revenant is a tale of revenge set in the 1820's uncharted American wilderness. While on expedition, Hugh Glass (Leonardo DiCaprio) is terribly mauled by a protective mother bear and left for dead by fellow members of his hunting team, especially John Fitzgerald (Tom Hardy). Glass defies all odds and fights against the forces of nature to seek vengeance on the man who took the life of his son and attempted to take his own,.

The Revenant is an exceptionally rare cinematic experience with it's powerful ability to move and devastate with both it's extreme brutality and breathtaking beauty. The film has been much talked about for it's graphic depictions of Hugh Glass' survival methods in the wilderness and the intense mauling sequence, and it is true that a strong stomach is required as well as a sense of preparation for these scenes. However, it is not violence and gore for no reason. Director Alejandro Gonzalez Inarritu does not hold back when it comes to showing the harsh reality of surviving in a world where man is not supposed to strive. Survival in the wild is not always clean nor pretty and this reality hits home in The Revenant and Inarritu must be commended for his commitment to realism in this film. The commitment to this realism of everyone involved in the film is incredible as the entire film was shot on location in the harsh winter conditions that are so unforgiving in the film. 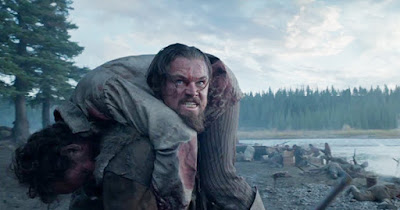 Yet in all the harshness and intensity which the beast of nature brings, the exquisite cinematography brings out the exceptional beauty of the world in which The Revenant exists. The wilderness is captured in all it's natural beauty on camera and strikes awe into the heart of the viewer as they experience all the aesthetics of the land where Glass makes his way. The choice of camera shots and editing throughout the film bring out the most in some incredible visuals such as lingering shots of the moon in the night sky and panoramic shots of the dense woodlands. The final shot of the film is one of the most moving in recent memory with the way it cuts through to your soul. The musical score by Bryce Dessner, Carsten Nicolai and Ryuichi Sakamoto is also wonderful.

Leonardo DiCaprio has had more than one role tagged as the best of his career over the years, but if this isn't his career best performance it is certainly his most physically demanding. While both DiCaprio and Inarritu have expressed that The Revenant is the most diffiult film that they have ever had to make, it is clear as crystal that this is the case when watching DiCaprio's performance that he has gone to tremendous measures to recreate the legend of Hugh Glass with as much accuracy and believability as possible. Although there is a lack father and son chemistry between himself and Forrest Goodluck (who plays the older Hawk), there is still a great deal of emotion felt by DiCaprio for his son, particularly when he himself is close to death and he has to watch injustice being done to his son. Hugh Glass is an extremely difficult role to play and DiCaprio carries the burden of the character to perfection.

Although DiCaprio is certainly the main player of the film, he has a extremely strong backbone of support in his fellow cast members. Tom Hardy is an absolute force as John Fitzgerald and is a character who one feels an instant dislike to, but also a sense of intrigue as to how far he can be pushed and what he will do when pushed that far. Domhnall Gleeson is also a stand out with a particularly strong performance as the expedition's captain, Andrew Henry. His performance becomes all the more interesting as the film progresses and his final scenes are absolutely outstanding.

The Revenant is a visual masterpiece that reminds one of the allure and danger of the unforgiving wilderness with it's realistic mode of storytelling and incredible cinematography. Alejandro Gonzalez Inarritu directs Leonardo DiCaprio to what will surely be remembered as his greatest on screen accomplishment and one of the reasons The Revenant will not easily be dismissed from one's memory.