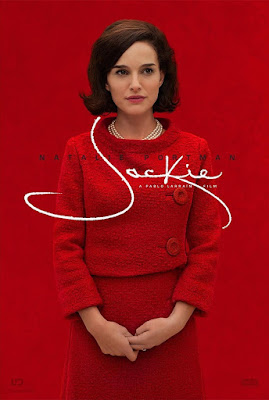 Jackie is now showing in the United States and is distributed by Fox Searchlight. To be released in Australia on January 12 and distributed by Entertainment One.

Pablo Larrain's Jackie paints a sublime portrait of the extraordinary First Lady in the most complex and darkest of days following her husband's death. While Natalie Portman's wonderful performance of Jacqueline Kennedy is it's focal point, the film is an incredibly beautiful piece of work that is subtly powerful and brilliantly written by Noah Oppenheim.

November 22 1963 was the day that shocked the world. While the nation mourned the death of their leader, President John F. Kennedy, his widow, Jacqueline Kennedy (Natalie Portman) was faced not only with making sense of the sudden death of her husband, but also the closing of the Kennedy's reign of power in the White House. The days that followed that terrible event were filled with confusion and grief for the former First lady, but also a great deal of strength and remarkable power.

While the film is a thing of beauty as a whole, Natalie Portman is the core strength, heart and soul of Jackie. With her first appearance on screen as Jacqueline Kennedy as she greets the journalist at her front door, it is obvious that this is so much more than a straight forward biopic performance. While Portman does completely disappears into her character by perfecting her speech, mannerisms and walk, it is what she brings emotionally and psychologically rather than just physically that makes this her such a revelation. In Jackie, Portman has the uncanny ability to pack so much power into such a restrained performance and she is truly breathtaking.

The former First Lady has been crafted into a character for the screen with complete sincerity and respect. She is presented as a woman who experiences a great deal of sadness and confusion in her grief in the most extraordinary of situations, which the majority of us can only imagine. While Jacqueline Kennedy has always been seen as an enigmatic historical figure, Jackie allows us to see her in the most human of ways despite her social position of power. She is not subject to overt hero-worship, but it is impossible not to respect her and grow even more fond of her, which is a credit to both Portman and the filmmakers. 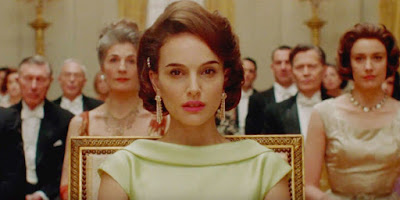 Jackie is beautifully constructed around it's main character. It is incredibly interesting to look at the way her story is told, as the screenplay is not written in the conventional fashion of the chronological order of events. Rather than this being confusing in any way, it makes the film feel well-rounded and Jackie's story complete. Flashbacks (particularly of the White House Tour) are used both to compare the lady she was to the lady she became and also to build suspense and intrigue in her story. The film plays back history from her point of view, which is a completely different story to the one we all know about what occurred on that fateful day.

And production-wise Jackie is completely and utterly exquisite. From beginning to end, the film feels as though it was truly shot in 1963. It's nostalgia is perfected by the incredible production design by Jean Rabasse, beautiful costume design by Madeline Fontaine and art direction by Halina Gebarowicz. Director of Photography Stephane Fontaine's cinematography is also incredibly special with the way he has the ability to turn so many scenes into a piece of art using the lighting and a range of long, short and travelling shots. Finally the harrowing musical score by Mica Levi does everything a score should do as it heightens suspense and builds on emotion to add even more power to the film.

Jackie is what you want every biopic to be like. Although Natalie Portman's performance is one of the most powerful and memorable of the past twelve months, the film does not rely purely on her to create magic and it is beautiful in every way.