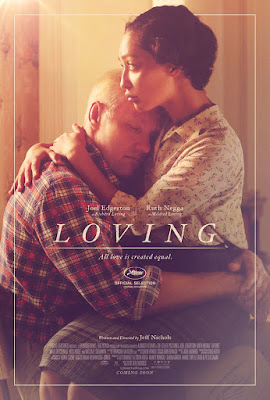 Loving will open in Australian cinemas on March 16 and is distributed by Entertainment One.

In another winning turn from writer/director Jeff Nichols, Loving is raw, subtle and endearingly human with absolutely sublime performances by Ruth Negga and Joel Edgerton.

The marriage of Mildred (Ruth Negga) and Richard Loving (Joel Edgerton) is legendary for it's role in the legalisation of interracial marriage in Virginia and 15 other states in 1967. In 1958, Mildred (who was of colour) and Richard (who was Caucasian) were married outside their home state of Virginia as interracial marriage was not recognised there. The two were arrested weeks later for anti-miscegenation and Mildred was thrown into jail when she was five months pregnant. Upon being released, the court rules that they must leave the state and not be in Virginia at the same time together again. The two continued to fight to have their marriage recognised in their home state and took their case to the Supreme Court.

While Loving is certainly being marketed as a romantic story of love overcoming all boundaries, it is a tremendous relief that it is not atypical of a Hollywood romance film, as the memory of Mildred and Richard Loving does not deserve that treatment. They deserve more than the candy-coating of their story to suit the wider audience. There will be many cinema goers who will disagree with me because adorable and all-encompassing romance is expected in mainstream cinema when the film is about marriage. It would have been far too tempting for the story of the Lovings to be told in such a way as a result.

However, with a writer/director at the helm like Jeff Nichols, this film was never going to be told like this. Nichols (who's past films have included Mud and Midnight Special) is known for his natural and raw method of storytelling and he was the perfect filmmaker to do the Lovings' story justice. The rural Virginian setting of Loving is extremely atmospheric and exquisite thanks to the film's glorious cinematography, but it also perfectly captures the socio-political climate of the southern state in the 1950's which is so very important to the story.

The best thing about Loving is that it does not try to push any of the issues or exaggerate any aspect of the film. The issue of race is not brought up in the film straight away as a way of showing that the Lovings never saw their race as being an issue in their relationship. They knew there wouldn't be a way to marry in Virginia because of the interracial marriage laws, so they travelled to Washington, DC. However, this is the only mention of race being an issue before they are taken into custody in their hometown. Race is a glaringly obvious theme of Loving, but its importance does not need to be emphasised as the issue and story are powerful enough without any help.

The Lovings were obviously quite reserved people who kept to themselves and even though their case was taken to the Supreme Court, they did not choose to appear in person. Despite the stigma that was attached to it, their marriage was not one that was out of the ordinary and this is perfectly depicted in Ruth Negga and Joel Edgerton's performances. The two give extremely subtle, but effective performances as the everyday couple who do extraordinary things to make sure they can provide a normal life for their family. Both Negga and Edgerton give beautiful performances and their chemistry is not overly physical, but never lacks power and strength.

Loving is an extraordinary and powerful story about ordinary people wanting their marriage recognised. It is a story that is most effective when approached with subtlety and as naturally as possible. Thankfully, Jeff Nichols has taken the story of Mildred and Richard Loving and done them absolute justice with this beautiful film.