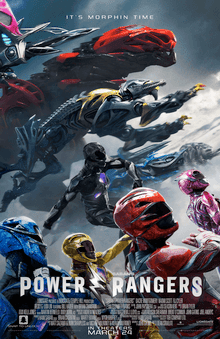 Power Rangers is now showing in the United States and Australia. Distributed by Roadshow Films in Australia.

In yet another 2017 action reboot,  the goofy and self-important Power Rangers attempts to target the teenagers of today, while at the same time unintentionally neglecting their first and loyal generation of fans.

Jason Scott (Dacre Montgomery) was always the cool kid at school, until a mindless prank ruins his future chances of doing anything incredible while he is still a senior. During his time in detention, he meets the recently outcast Kimberly (Naomi Scott) and eccentric Billy (RJ Cyler). His unlikely new friendships with these two lead the three of them to uncover the site of an ancient alien spacecraft, along with other fellow students Zack (Ludi Lin) and Trini (Becky G.). The five discover that they have been chosen to be the five Power Rangers who are to help Zordon (Bryan Cranston) protect the world from the evil Rita Repulsa (Elizabeth Banks). First, they must learn to work together to become who they are meant to be.

Power Rangers, which is based on the 1990's television show "Mighty Morphin Power Rangers", is stuck in a time-warp believing that it is still primarily targeting the same young audience that it once was. However, with taking on a project like this, director Dean Israelite and screenwriter John Gatins have an inbuilt responsibility to also cater for the faithful who were fans of "Mighty Morphin Power Rangers" in their childhood. As a result, Power Rangers works rather well as a film for teenagers with it's simplicity, basic dialogue and themes, characters and stereotypes that are relatable for the high school demographic.

However, this clear vision of the filmmakers to make a superhero film about teenagers for teenagers neglects the majority of Power Rangers audience members....those who watched, loved and were faithful to the television show a good 20 years ago. These long time fans will find the film and it's screenplay a little too basic and silly to completely enjoy. While the action sequences are impressive, there are definitely not enough of them to make the film particularly fun or entertaining to adults who are used to watching more challenging action films brought to us by Marvel and DC. However, there are still reasons to believe that this fragment of the audience has not been completely forgotten as there are a number of shout-outs to the original television series, including the famous "It's Morphin time".

What has most noticeably changed from the 1990's Power Rangers is that the 2017 Rangers are more diverse than they have ever been....and this isn't in regards to race. The filmmakers have made sure that all teenagers who feel as though they are out of place in the world feel inspired by watching Jason, Kimberly, Billy, Zack and Trini. The five rangers are all considered misfits as they do not fit in at their school and in a very The Breakfast Club-esque turn of events, are all part of their school's Saturday detention. However, despite their inability to fit in, they all do incredible things. Most notable of these new special qualities are that of Billy having ASD (Autism Spectrum Disorder) and Trini being acknowledged as queer. 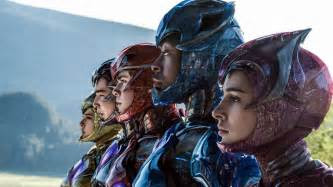 While it is absolutely a step in the right direction having a teenage queer superhero, there is too little done with this to make a real impact and truly feel ground breaking. Director Isrealite told The Hollywood Reporter that he wanted the moment that Yellow Ranger Trini subtly reveals to her new friends that she is not straight to encourage teenagers to believe that "That's OK". However, there is so much more that could have been done with this scene and it's aftermath that would have made it much more of a triumph for the LGBTIQ community, especially for it's younger members. In the scene where Trini "almost" makes her confession, it is still unclear whether she has just revealed her true sexual orientation or not. Israelite says in The Hollywood Reporter article that she is still confused and questioning (as many teenagers are at that point of their life), but this part of the scene seems too vague to be considered powerful. Again, it is no doubt that Trini being acknowledged as queer is a very positive step for both the action film genre and high school sub-genre, but it was an opportunity that deserved to be made more of.

Unfortunately for Becky G.'s Trini, her character development is exceptionally weak which is a travesty considering how pivotal her role is to the film and to cinema. The same can be said for Ludi Lin's Zack, as it is Dacre Montgomery's Jason, Naomi Scott's Kimberly and RJ Cyler's Billy who certainly have more screen time and as a result, their characters are dissected a great deal more. Montgomery, Scott and Cyler all do rather well in their roles and know their characters well enough to give convincing and well-rounded performances.

Elizabeth Banks' villainous Rita Repulsa is a great disappointment. When she first arrives into the modern day, she is truly terrifying. If she had kept the same twisted, ancient features she has in her first few scenes throughout the whole film, Power Rangers would have been a great deal more thrilling. However, the longer the film goes on, the more unintentionally comical and weak her character gets with some atrocious lines of dialogue. In her final scenes, she really is nothing more than a 90's young adult television show villain and this does nothing for the film.

The masses who will be flocking to see Power Rangers for a piece of nostalgia from their childhood will be disappointed with what they see. The film and it's story have not grown up with their audience and while there is a slight element of fun in the film somewhere, it is one of the more forgettable reboots and remakes.