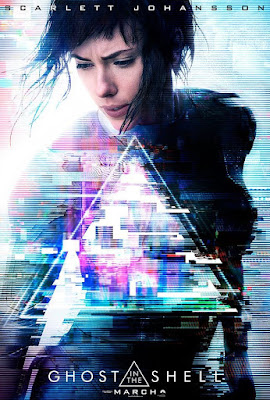 Ghost in the Shell is now showing everywhere and is distributed by Paramount Pictures.

Rupert Sanders' anime to live-action redux, Ghost in the Shell takes a cinematic sci-fi concept that is rather tired and gives it yet another spin. However, with it's entrancing, spectacular visuals and cinematography, the film set's itself apart from the mould by being haunting, mesmerising and entertaining.

Yet, like several other Hollywood films this year, Ghost in the Shell has been shrouded in controversy which has inevitably hurt the film's chance of widely being accepted by fans, praised critically or receiving any spectacular box office returns.

In the not too distant future, our society has become increasingly obsessed with information sharing and as a result, terrorism has now been extended to hacking into others minds. The ultimate weapon has been created by transplanting a human brain into a cyber-enhanced body and the result is Major (Scarlett Johansson), who is the first of her kind. As a new enemy surfaces that threatens those close to Major, the ghost of who she once was in her past life starts to slip into her subconscious and leads her to question everything and everyone she trusts.

Ghost in the Shell acts as both a remake and origins story to the 1995 anime original, The Ghost in the Shell. A concept that worked so well and felt original in the mid-1990's (especially as an animation) unfortunately does not have the same impact in 2017, as we have now seen more than our fair share of Artificial Intelligence films that seek to question their ability to take on human emotions and characteristics. We could argue that if this film had been remade years ago it would have been ground-breaking and as creative as a remake could be, but it still would not have worked for avid fans of the original in regards to the casting of the likes of an actor like Scarlett Johansson. 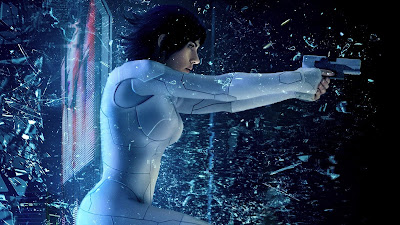 The casting of Scarlett Johansson in the role of Major is a controversial one, but should not be used as a tool to actually review or judge the film as a whole. This topic is more one for people to discuss the issue of Hollywood white-washing. This is something that has been featured in Hollywood films for it's entire existence since the early 1900's, but in today's society it is more of an issue than it ever has been. In regards to the casting of Johansson, Michael Carmen Pitt, Juliette Binoche and Pilou Asbaek, it is not an intentional insult to Japanese actors or filmmaking. It is, however, a marketing ploy to make the film more accessible to wider audiences. Yet, with the original The Ghost in the Shell being as well known as it is, it is a useless business technique as it may well have been greater accepted by many without a Caucasian Hollywood actress in the lead.

Despite her controversial casting, Johansson is an absolute powerhouse. She has proved herself in the past few years as an outstanding action actor and her role as Major in Ghost in the Shell is physically reminiscent of that in 2014's Lucy and her Marvel persona of Natasha Romanoff/ Black Widow. It is such a shame that with the self discovery aspect to Johansson's character of Major, there is so little emotion written into the film. There is much opportunity to make the film an emotional experience and bring about a debate about the direction technology is heading, but this is left obsolete. Johansson does give a great physical performance, but the screenplay and direction don't support the level of intensity and emotion her character should have.

However, Ghost in the Shell's saving grace is in it's visual production, cinematography and incredibly haunting musical score by Lorne Balfe and Clint Mansell. The film is visually spectacular with it's amazingly detailed production design of a futuristic Tokyo and is made to be especially atmospheric with it's beautiful score accompanying it's incredible images. The cinematography by Jess Hall is also absolutely superb. It is it's outstanding visuals and special effects that make Ghost in the Shell worth watching and actually quite awe-inspiring.

Ghost in the Shell's redeeming features are in it's production, but the film as a whole lacks any emotional depth and wastes the underlying issues and acting talents of Scarlett Johansson...despite whether she was the correct casting choice or not.