Well done MTV...but are we ready for gender neutral awards? 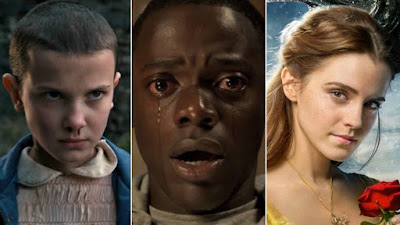 On April 6, the nominations for the 2017 MTV Movie and TV Awards were announced with one glaring difference from other years and other award shows...the acting categories had gone gender neutral.

Both the Best Actor in a Movie and Best Actor in a Show categories this year contain both male and female nominees, a move that has not been seen before in major award shows (with the exception of the Grammys and Britain's National Television Awards). A split right down the middle occurred with the Film nominations with three male and three female actors in contention, while four females were nominated in the Television show category and two males. Although the MTV Awards do not carry the same prestige as other award shows (Academy Awards, Golden Globes, Screen Actors Guild Awards, etc.), it is a move that certainly shows a move forward in gender equality in Hollywood and the entertainment business.

While this move for the MTV Movie & TV Awards is a very positive one, it makes one ponder whether the idea could catch on and other award shows follow suit. It would definitely be a strong stand for women and one many would embrace and celebrate. MTV can be commended for making such a strong statement and as the awards are voted for by the public, it would not be a surprise to see Emma Watson, Hailee Steinfeld or Taraji P. Henson voted for as the winner for this reason.

However, could this move by MTV encourage other award shows to become gender neutral?

This has nothing to do with the quality of male and female actors in the business. Talent wise both genders are without a doubt on par with one another. The problem lies with lack of substantial roles available to women in Hollywood, especially in film. This is not a new argument. Mary Pickford said in 1935 "It’s becoming a woman’s world, year by year, almost day by day". This still rings true, but more than 80 years later we are still fighting for gender equality in Hollywood in regards to the number of strong female roles among other issues. We have come a long way, but there is still a long way to go.

Believing that there should or should not be gender neutral acting categories when awards season rolls around has nothing to do with sexism or feminism, it has to do with fairness. While the quantity of these strong female roles is significantly less than that of males, it would make it a great deal harder for females to compete and win an Oscar or any other award with gender neutral categories.

So this would have meant that this year Casey Affleck would have been directly competing with Emma Stone and Mahershala Ali with Viola Davis. These would have no doubt been intriguing and unpredictable competitions, but one would fear that the actual nomination fields would have consisted more of males than of females.

The good news is that things are changing in Hollywood as we speak....unfortunately just not as quickly as we would like. There may well be a chance in the future to combine the male and female acting categories at prestigious award shows, but that day is not today. If it was to happen, it would most definitely shorten the length of award shows, which would make many people happy. The other argument here is that many creatives prefer not to label themselves as male or female so eliminating gender specific categories is more politically and socially acceptable.

Without a doubt, it is a great move by MTV to make their awards gender neutral and they deserve praise for initiating a giant step towards gender equality in the film world. It may not be time for the bigger and more prestigious industry awards to do the same, but that day is coming.
Posted by NP1982 at 1:51 AM