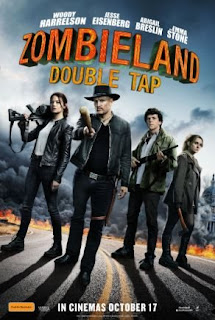 Zombieland: Double Tap is exactly the type of movie needed if you, like so many others, need the right amount of silliness and apocalyptic zombie violence to get you through the annoyance of the world in the current state it is in. Never taking itself too seriously and having a clear sense of what it is, the sequel to 2009's Zombieland is a complete riot and brainless fun. Pun intended.

The horror sub-genre of zombie films has become overly saturated in recent years, and one would be forgiven for wondering why and if we really needed a sequel to Zombieland. The truth is that we never needed Double Tap and there is really no reason at all it had to be made as it doesn't offer anything new or different to either the genre or the first film. However, in the name of ridiculous and ludicrous fun, it is definitely not a crime against humanity that it exists. Zombieland: Double Tap offers up a form of violent and often random comedy with plenty of action-packed horror sequences that makes it entertaining and enjoyable.

Taking place a decade after we first met Columbus (Jesse Eisenberg), Tallahassee (Woody Harrelson), Wichita (Emma Stone) and Little Rock (Abigail Breslin), the four are still surviving the zombie apocalypse and have arrived at the home to beat all homes, the White House. Their new place of residence is an amusing choice to have as in Zombieland's alternate universe (which would be our current reality), nothing happening in the White House is comical. So using this opportunity to lighten the tension felt towards American politics and turn it to laughter through this film is a blessing. The Double Tap screenplay really does not have much to offer that is different to the first film or unpredictable. It is another tale of survival in a world that has been taken over by the undead, while trying to maintain the need for regular human needs and wants and social interaction. As expected, the two often collide with each other. Breslin's Little Rock, in particular, struggles with still being the baby of the group, although she is now an adult and wants to have experiences typical to her age. 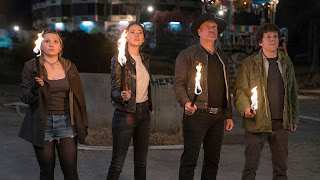 The film completely delivers on it's promise of action with various spectacular and gory forms of zombie death at the hands of Columbus, Tallahassee, Wichita, Little Rock and the fiery and heroic Nevada (Rosario Dawson). Double Tap also delivers on the promised laughs, but is still not immune to several attempted jokes falling flat, including the needless and ridiculous post-credits scene. Harrelson and Eisenberg deliver many of the laughs with their wit, as does Stone with her brand of sarcasm. While Breslin, unfortunately, struggles to keep up with the comedic ability of her co-stars with her character being completely bland and uninteresting.

Yet, it is Zoey Deutch as clueless Madison who steals the show in every scene she is in. Madison is stuck in the image of the late 2000's then Hollywood It girl, Paris Hilton, but is light years more hilarious than anything that was seen on "The Simple Life". The character is one that shouldn't work and would be painful and offensive if anyone else but Deutch had played her. Instead she adds to the hilarity and fun of the film, which is a credit to Deutch as a comedy actor.

It is true, Zombieland: Double Tap doesn't need to exist. However, a film that is as mindless as this with its thrilling action and comedy is a great thing to have exist in this world whether it is needed or not.