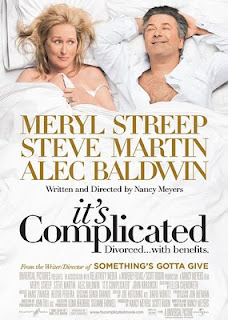 In My Own Words
The first thing I will say here is how good it was to see a movie in the cinema that really made me laugh out loud (or LOL for all our young readers out there). It is the first time in so long that I have been able to laugh loudly in a cinema, while everyone else who is watching it is also doing so. I had had one of those days feeling sorry for myself at work and “It’s Complicated” was the perfect remedy. I went into the film thinking that it wasn’t going to be that funny or even that good (an example of why film critics should not read other reviews before they see the film), but I was pleasantly surprised. I definitely admire Nancy Meyers for her ability to make a romantic comedy that is not classified as a “chick flick”, a trap which most romantic comedies fall into.

The cinemas are still extremely busy at the moment, which definitely pits a smile on my face. I know this time of the year they are busier than others because it is holidays and there is a greater range of films out, but it still is a great feeling to know that in a time such as now, the movie cinemas are alive and well.

Review
“It’s Complicated” is the new film by Nancy Meyers, who has such films as “What Women Want”, “Something’s Gotta Give” and “The Holiday” to her name. Staying true to her roots, “It’s Complicated” is yet another film about relationships, and that’s not a criticism of any type. Meyers is extremely talented when it comes to picking an ensemble of actors who have on screen chemistry, writing a witty script and making a romantic, comical movie that is not just for chicks. “It’s Complicated” is a perfect example of this. Jane (Meryl Streep), a mother of three, has been divorced from her husband, Jake (Alec Baldwin) for ten years and feels as though she has finally got her life sorted out with the perfect house and perfect career for her. That is until a night in New York for her son’s graduation turns into a night of passion with her ex-husband, who has remarried a younger woman. They begin an affair and matters are made even more complicated when Jane attracts the interest of her architect, Adam (Steve Martin).

“It’s Complicated” is, unlike many other movies of its calibre, completely unpredictable. Throughout the film, it is uncertain whether Jane will end up with Jake or Adam. This is unusual of a romantic comedy these days and something that should be celebrated when it does occur, as no one wants to know the end of the film in the first 10 minutes. The film is light and fun, with no intense moments. The visuals are fun to watch as is the dialogue fun to listen to. The script is witty with lots of laughs throughout. It is not only the script which makes the film so hilarious, but the way in which the film is directed also contributes to it. The films the characters do, from their overt actions to their facial expressions add to the hilarity of the film and this can be put down to the way in which Meyers directs the film. “It’s Complicated” has what may be the funniest smoking scene of the year.

As one can expect from the cast members, the acting is realistic and a pleasure to watch. Meryl Streep is, as always, a delight. The role of Jane is one that is not quite as intense or complicated as her recent roles, but it is still one in which she is able to show her versatility as an actress. The first 20 minutes of the film are perhaps not as good a performance as the rest of the film, but she does make up for it. Perhaps the only criticism of the character of Jane is that you don’t see quite as much of the pain of her divorce in her acting as you do in her dialogue. One would expect a woman who has been through such a hard divorce as it was said to be, even if it was 10 years ago, to be angrier and more intense when explaining to her ex- husband why she feels the way she did. Therefore, Streep did do a good job, but there was more she could have done with the role. Alec Baldwin also did a good job, as did Steve Martin. The on-screen chemistry of Streep and Baldwin worked surprisingly well and they did seem to visually on the screen and make the relationship between Jane and Jake come to life. John Krasinski who plays Jane and Jake’s to be son-in-law, Harley is a scene stealer and plays an extremely funny role.

The major criticism of the film is that it does sugar-coat people’s lives after divorce and does not show on film how hard it can be. In the script, it does try to explain the pain, but not on screen. In saying this, Meyers is trying to create a light-hearted comedy so it can be forgiven. It also strives to show that peoples lives do go on after heartbreak and life is what you make of it, a theme which is prominent in most of Meyer’s films.

“It’s Complicated” is not a complicated film at all, but a funny and light-hearted adult comedy. There are many funny moments in it that, unlike other films, are not all featured in the commercials for it. It is a film that will be enjoyed by adults of all ages who need to have a good laugh.
7.5/10