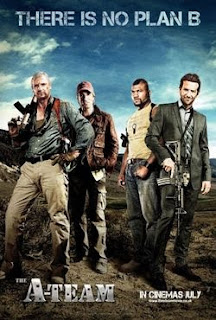 In My Own Words
Ah, another remake! To be completely honest, I have never seen an episode of the TV show “The A-Team”. According to my lovely father, the film version is nowhere near as corny as the television series. Those who are big fans of the original show will most probably see this as a downfall, but those like myself who are not familiar with the show, will most probably see it as a plus. There is nothing worse than going to see a movie which is based on an old television show or movie which you haven’t seen and being completely confused. I guess that’s what directors of these films have to watch, that they don’t discriminate and that they can reach the widest audience possible. “The A-Team” didn’t fall into the “just for fans of the original” category, which is a great thing so people, such as myself, can also enjoy this film! I was genuinely surprised by how much I enjoyed this film and happy to say so!

Any “The A-Team” television show fans here? What did you think of the remake? I can only ponder which television show will get its remake next. I have actually heard that there is a “Gidget” remake on it’s way!

Review
Finally, a great action film with amazing special effects and a solid story. This doesn’t happen too many times in a year, but “The A-Team” is one of those rare films. It is thoroughly entertaining and extremely enjoyable film which will delight not just fans of the television series. The A-Team are Colonel John “Hannibal” Smith (Liam Neeson), Lieutenant Templeton Peck (Bradley Cooper), B. A. Baracus (Quinton “Rampage” Jackson) and Murdock (Sharlto Copley), a group of soldiers who have been accused of a crime they didn’t commit. In order to clear their names, there is a lot of clever planning and illegal activity (eg. Breaking out of jail) to be undertaken. From here, they endeavour to prove their innocence and uncover the true instigator of the crime.

The special effects in “The A-Team” are truly amazing. Special effects in action films these days are getting better and better and “The A-Team” is an example of what they can provide these days. These are plenty of explosions and high-pace action sequences to keep you interested the whole time, there are certainly no boring moments. Although some of the scenes may make those who are afraid of heights or those who suffer from motion sickness feel quite nauseous. The action can become a bit too much at times, meaning that it can sometimes seem just like a showcase of special effects and can be a bit over-indulgent. The story does not lack lustre as a result of this onslaught of action, as many films fail into the habit of doing. The script is very well written and extremely clever. Not only this, but it is also quite funny. The cinematography in particular scenes is also extremely impressive, particularly the court case scene.

The acting is not bad in the film, but it’s not its strongest point. Liam Neeson does well as Hannibal and does actually resemble an older George Peppard, who played the same role in the original television series . Sharlto Copley is probably the stand out of the actors in the main roles in his role as Murdock. He isn’t the standout for the reason that his performance is particularly better than the others, but his character is very well constructed and very funny. Jessica Biel gives an impressive performance as Charisa Sousa, playing the role of a hard-hearted captain who shows no mercy.

“The A-Team” is a lot of fun and a one of the best action films of the year. Not an Oscar winner, but a good film nevertheless.
7/10