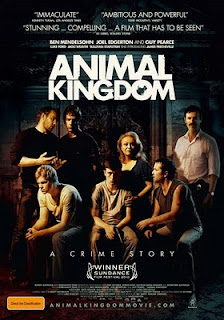 In My Own Words
I just have to say how proud I am to be a movie critic and have the opportunity to review so many Australian films this year. Not only do I get to review them, but I get to tell everyone how wonderful they are! And I am not the only one saying so. “Animal Kingdom”, which is my latest review, premiered at Sundance 2010 and showed the world what the Australian film industry can do by winning the Grand Jury Prize in the World Cinema- Dramatic category. “Animal Kingdom” is a brilliant piece of work. Not for the faint hearted, as people would expect from hearing the subject matter, but still a film that has to be seen. Australian viewers, don’t be fooled, this film is not an “Underbelly” rip off.

Just a side note, it still amazes me how some people can leave their manners at the front door when going to the movies. I know people normally see groups of teenagers as being the main offenders of this, but I find grown adults to be just as bad times. During this film, a lady’s phone went off three times before she realised she should turn it off. Turning off my mobile has become like a ritual for me as soon as I buy my ticket and so many cinemas place a clever advertisement in the preview about turning your mobile off for the sake of others, but some people still just don’t get it. I find more and more people talking throughout films now too, or maybe I just go to too many films so it seems like there is more people falling into this category. All I’m saying is, where has cinema etiquette gone?

Review
“Animal Kingdom” is one of the best Australian films to be released in a long time. Not only this, it is perhaps the best crime drama released this year thus far. A film with outstanding characters brought to life by fantastic acting and an extremely well written script by director and writer, David Michod. Joshua Cody(James Frecheville) goes to live with his grandmother (Jacki Weaver) and his uncles after the death of his mother from a heroin overdose. Although this may seem like a better situation, his uncles are a group of armed robbers who the police are always out to get. As the police get closer and more family deaths occur, life gets more and more complicated for Josh. However, blood runs thicker than water.

What an amazing story and script. “Animal Kingdom” has so many twists and turns that it becomes clear sooner rather than later that things will never turn out the way you think. It is so easy to become emotionally involved in this film with the way the characters are constructed. Although not as hard-hitting as it may have been ( but in no way is it a subtle or easy to watch film), there are many shocks and suspenseful scenes. There is a lack of violent scenes which is interesting. There is violence spoken of and hinted, but no gruesome scenes. Just the hint of blood here and there. Quite interesting for a crime drama. The soundtrack is absolutely superb in the way in which it enhances the emotion of each scene. The opening title sequence is accompanies by music, sounds and also images that create an uneasy air and almost a feeling of evil. This is completely turned around a few scenes after when the family leaves a restaurant in fits of laughter and smiles and the soundtrack has the ability to make the audience see how much the family love each other and even though they are involved in crime, they are just like any other family when they have a good time together. Such an accomplishment in film making.

Unlike many other crime dramas, this film focuses more of the interrelations of the family and those around them rather than the actual crimes they commit. The characterisation is absolutely outstanding. The audience feels an attachment to each of the main characters and shares everything with them. It is a great tribute to a film when the audience feels every emotion with the character and can feel as if they know them personally. In his debut and breakthrough film role, James Frecheville is the lead as Joshua Cody. His performance at the beginning seems a little dry, but it is soon realised that that is all part of his character and he definitely proves himself as an actor as the film goes on. Jacki Weaver is outstanding here. Her role as the optimistic Cody mother and grandmother, Janine has many dimensions. She can be so annoying in her optimism, superficiality and overbearing love for her sons that she is just brilliant. Ben Mendelsohn as Andre “Pope” Cody is extremely creepy and evil, and is easily hated throughout the film by the audience, but he is absolute pleasure to watch. Sullivan Stapleton is also a standout in his role as Craig Cody, as is Joel Edgerton as Barry Brown.

“Animal Kingdom” is a film that must be seen. It is an accomplishment in film making and contains all the factors necessarily to make a successful and well done film. Disturbing, but beautifully so.
8.5/10