El secreto de sus ojos (The Secret In Their Eyes) 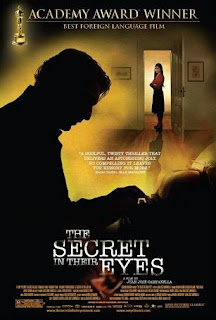 In My Own Words
Finally the wait is over for Australian filmgoers, as we finally get to see the 2010 Academy Award’s Best Foreign Language Film in cinemas! “The Secret In Their Eyes” was not the favourite to take home the award, but it is extremely easy to see why it did. It is a brilliantly made film with an incredible story. So many movies lack a good, solid story these days and seeing one with a great story makes me want to stand up and cheer at the end of the movie.

Review
“El secreto de sus ojos” (The Secret In Their Eyes) is a winner. A winner in many ways. Of course it won the Oscar for Best Foreign Language Film earlier this year, but it has a winning script, winning cinematography and winning characters. How can you go wrong with a combination like that? There is so much praise to be sung about this film. It is a great thriller with more of a “How is it going to end?” type of suspense, rather than a “Who did it?” suspense. Benjamin Esposito (Ricardo Darin) is a retired federal justice agent, who has written a novel based on a case he investigated nearly 30 years ago in which a young woman was raped and murdered. It is a case he can’t let go of for how emotionally attached he became to all the people involved. We are taken back in time to relive the case investigation with Esposito, and then forward again to 1999 where Esposito is looking to find the perfect way to wrap up his novel.

Although originally a bit dragging, leaving the cinema after seeing this film feels like getting off a rollercoaster. There is very little action in the film, but “The Secret In Their Eyes” has an absolute powerhouse of an ending. The story and script is perfectly written with quick witted dialogue which will even draw a few giggles throughout. Don’t be fooled though, this isn’t a film for the light hearted. There are many gruelling images and topics that will pull at people’s hearts. It is a treat to see a thriller/mystery film which is unpredictable and original. What makes this film so original is that it is a thriller that also looks at friendship and the passions in lie rather than just the subject at hand. Another extremely strong point of this film is the cinematography. The photography is absolutely amazing throughout with some beautiful, breathtaking images. The way in which some of the most important scenes in the movie are filmed is also very impressive. The choice of camera angles and effects enhance the meaning of each scene and as a result are able to give the greatest feeling of emotion and understanding on the audience. Director Juan Jose Campanella does a marvellous job with the direction of this film and takes every opportunity to push the boundaries.

The characterisation is also very well done in “The Secret In Their Eyes”. It contains some very strong characters and ones which people will like or dislike immensely. Ricardo Darin does a fine job at leading the film. It seems like his acting gathers strength throughout the film, as he performs better in the second half of the film than he does the first. Soledad Villamal also does very well as the Esposito’s business colleague and would-be love interest, Irene Menendez Hastings. She gives a strong performance of a strong female character. The chemistry between these two characters is quite sweet in parts and you can feel in their first scene together how much they enjoy each other’s company, but it is not a particularly strong bond. The audience remains indifferent as to whether these two will be together or not, and it does not feel as important to the story as what Campanella would like it to be. However, the friendship between Esposito and his drunken friend, Pablo Sandoval, played by Guillermo Francella, is much stronger. Francella gives a great performance in which he is able to produce humour and inspiration. An unlikely combination, but one which really works on screen. Javier Godino is also commendable with his change in character in the few scenes he is in.

“El secreto de sus ojos” (The Secret In Their Eyes)is deserving of all the praise it has received and is indeed deserving of its highest honour in its Academy Award. Unfortunately, people who do not enjoy reading subtitles may not find this film to be as riveting as others may. Non-fans of subtitles may find the first half a little too monotonous for them, but make it to the second half and they will be rewarded. Stand up and take a bow Argentina!
8/10