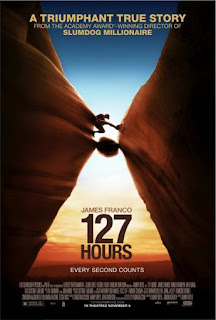 In My Own Words
Oscar contender review number no.7. Never fear, by February the 27th we will have all of the Best Picture nominiee's reviewed. As far as "127 Hours" goes, it is infamous as being the film where the guys cut's his arm off. I hate to be a killjoy and supplying a major spoiler of this film, but if you don't know this part about "127 Hours", you must have been living under a rock. This was the major reason I wasn't looking forward to seeing this film. I don't know about you, but watching people amputate their limbs is not really one of my favourite things to do. However, the film around the amputation....is actually quite beautiful. I never thought you could have bodily amputation and beautiful in the same sentance, but there you go. That is Danny Boyle for you. He is one film maker who is able to make the most unlikely aspects of a film beautiful. All you need to do to see proof of that is watch "Slumdog Millionaire". Boyle is truly one of the geniuses of ensembling a film with beautiful and amazing cinematography around a gruesome reality.

Review
"127 Hours" is another work of genius by Danny Boyle. Not only is it another beautiful piece of work for Boyle, but it is also a career best performance thus far for James Franco. This combination allows for a subject matter and story that could be completing unsettling and uncomfortable, to be life changing and inspirational. Although, the film can definately be unsettling as it can remind you of the powers of nature beyond our control. "127 Hours" is based on the book of the same name by Aron Ralston (James Franco) who retells the 5 days which begun by canyoneering in Utah and getting his right arm submerged between a fallen rock and a canyon wall. He is stuck in this position for 5 days on his own and in this time, re-evaluates his life and the relationships he has with the people in it.

The direction of this film is brilliant right from the very beginning. The cinematography is just beautiful and takes on the form of a storyteller. For example, the beginning opf the film shows a montage of the things which Aron is seeing from his car as he drives to his destination. This montage of images such as a McDonalds sign and other pieces of main stream advertising logos shows the superficiality of Aron's life before the accident. The visuals of Bluejohn Canyon and it's surrounding areas are just breath taking. However, it is unreal how such a beautiful piece of nature could also be so dangerous and life threatening. The flashback scenes are also made with great care and definately give the feeling of nostalgia. They show how Aron, in hos time stuck in the canyon, is almost having an out of body experience and is seeing himself from other eyes. Director, Danny Boyle is one of the masters of cinematography and lives up to his reputation in this film project that seems like it was made for him. The soundtrack of the film is also a winner, another sign of a Boyle film. It perfectly fits each scene and creates tension by working with the visuals and the feeling of the scenario.

As previously said, this is a career best for James Franco. He carries the film from beginning to end by himself, being the single focus and in every single scene. It is difficult to maintain a film from beginning to end by yourself, let alone be that you are in the same position and location for the large majority of it. His performance is definately Oscar nomination worthy as Franco perfectly shows Aron's initial cockiness and his descent into madness over the time period he is stuck in the canyon. The change of character is perfect throughout the course of the film. Franco's performance is inspiring and he was the perfect choice for Aron. The man himself should be proud to have been depicted with such a brilliant performance.

"127 Hours" is beautiful. With the final event the unfolds while Aron is in the canyon, the film should be anything but beautiful, but there is no other way to describe it. It is completely captivating even if you know what is going to happen and it's visuals are almost hypnotic. Boyle has made yet another masterpiece with "127 Hours".
8.5/10