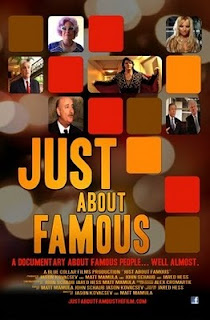 In My Own Words
At Movie Critical, we are always happy to give help to those who deserve it. As well as review the latest in cinema releases, we also take pride in reviewing independant film gems. It's a great feeling to know that you are helping out the independant film makers who have worked so hard to make a great film by posting a positive review. Making a film is no easy task and requires a huge amount of commitment and creative talent. It is such a credit to these film makers, who don't earn anywhere near the same amount of money as the Hollywood film makers, when they make a film that could easily compete in the mainstream world.

I have had the great pleasure of helping out some brilliant independant film makers in the past and it is something I look forward to doing more of in the future. This time round Movie Critical will be reviwing "Just About Famous", a short documentary about the lives of celebrity impersonators. Sound funny? It is! "Just About Famous" has played in 15 film festivals to date including DC Shorts, Orlando Film Festival and will be shown at the upcoming Cleveland International Film Festival. We wish Matt Mamula and Jason Kovacsev the best of luck in the upcoming festivals!

These are my own words and here is my review

Review
When are you lucky enough to get Bill Clinton, George Bush, Barack Obama and Sarah Palin in the room together? Sound like just a political gathering? Well, add to the equation Elvis Presley, Jay Leno, Brittney Spears and Robin Williams and what do you have? The Sunburst Convention of Celebrity Tribute Artists! "Just About Famous" is the short documentary which allows you to go behind the scenes of the convention in the best and most hilarious way possible. This short feature finds out the stories behind several of the best celebrity impersonators and how they came to do what they do. They clear up the misconception that celebrity impersonators are people who are such big fans that they come to believe they are these people. As Jay Leno impersonator, Gary Alan says "All I have to do to know I am not Jay Leno is to walk out to my car!" "Just About Famous" is filled with funny one-liners just like this and you would have to have a very dull sense of humour not to find a duet between Bill Clinton and George Bush tribute artists, Dale Leigh and John Morgan hilarious.

A good documentary must always have a subject which is of interest to a number of people, but must have a factor which sets it apart from all other documentaries. Celebrities are celebrities because of public interest. People want to know about celebrities and their lifestyles. So creating a documentary about people who are almost celebrities is genius, and the setting of the convention is the perfect place for it to be undertaken. Film makers, Matt Mamula and Jason Kovacsev have pieced this short documentary together perfectly. The short is clean cut and explores the questions about impersonators that people want answered. It is just a fun piece of work and an absolute joy to watch. Although "Just About Famous" is only a short documentary, it leaves you wanting more. There is definately room for at least another hour of footage before the interest wears off, if the interest wears off at all. "Just About Famous" is more intriguing being about the celebrity tribute artists of Jay Leno, Robin Williams and Dr Phil than it would be watching documentaries on the celebrities themselves.

It is a credit to Matt Mamula and Jason Kovansev as to how good "Just About Famous" really is. It is not often you finish watching a short only to realise how much you really wished it had gone longer. Maybe a sequel is in the works for after it has done the festival rounds? These two directors have a long career ahead of them in film making.
9/10

Just About Famous - Trailer from Blue Collar Films on Vimeo.